The Minister of State for Petroleum Resources, Chief Timipre Sylva, on Tuesday, said the April 2023 completion date for the rehabilitation of the Port Harcourt refinery was feasible and that the plant would refine 60,000 barrels of crude by early next year.

Speaking on the state of repairs of the facility, which was projected to gulp $1.5bn, the minister expressed satisfaction at the level of work. 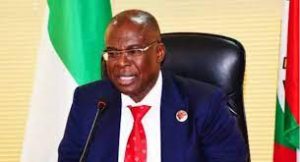 Sylva stated this while answering questions from journalists shortly after a tour of the Port Harcourt Refining Company’ in Eleme, Rivers State on Tuesday.

He said: “This project kicked off second quarter last year and where they are now is quite impressive. It is on schedule. The commitment is to deliver 60, 000 barrels per day from this refinery by first quarter of next year, and, of course, we are quite happy.”

The minister also promised that the Federal Government would put an end to all forms of illegal oil bunkering going on in the Niger Delta, saying such criminal activities must not be legalised.

Sylva said the modular refinery programme of the Federal Government was on course and urged people to take advantage of the programme.

He, however, said modular refinery should be separated from the illegal oil refining going on in the Niger Delta resulting in the soot pandemic in Port Harcourt and its environs.

He said the President Muhammadu Buhari had inaugurated a modular refinery in Imo State last year, adding that similar projects were currently ongoing in other parts of the country, including Rivers State.

Sylva said: “When people begin to equate modular refinery with the criminality that is going, I think they don’t go together.

“We must stop that activity by law enforcement and that has started. The programme of starting a modular refinery had always been on.”

He urged any law-abiding Nigerian who wants to invest in this area to endeavour to access funding and the licenses from the Federal Government.