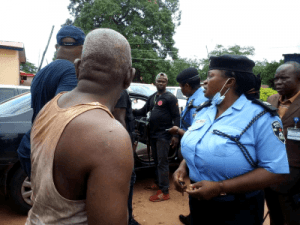 Operatives of Benue State Command on Thursday rescued a lecturer, Dr Godwin Kwanga who was kidnapped at gunpoint in Makurdi, Benue State capital. Dr Kwanga lectures at the Department of Geography at Benue State University, Makurdi.

He was said to have been abducted by some gunmen along Gaadi Layout in Makurdi around 11:30 p on Tuesday.

Police Public Relations Officer in the state command, DSP, Catherine Anene said that the lecturer was rescued on Thursday when operatives invaded the hideout of the suspected kidnappers.

She added that a Toyota Highlander SUV belonging to the victim was also recovered.

According to the PPRO, “On 2nd September 2021 at about 10 am, information was gathered that a kidnap victim was held hostage at Tse-Anjov village, Welfare quarters, Makurdi.

“Operatives invaded the hideout and the suspects engaged the police in a gun duel but were overpowered by the police.

“The victim was successfully rescued unhurt while the hoodlums escaped with bullet wounds.

Anene further said that some items which included; one (1) Ak47 rifle loaded with eight (8) live ammunition, forty-three (43) expanded ammunition and two Toyota Camry vehicles were recovered from the scene.