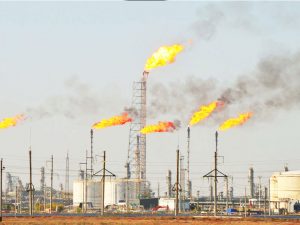 The controversies surrounding the Petroleum Industry Bill (PIB), recently passed by both chambers of the National Assembly seem unending, has the new bill, it has been revealed, has foreclosed the payment of gas flare penalty funds to oil-producing communities, as part of the many cut-back against host communities in the Niger Delta.

The bill passed few days ago by the National Assembly, and awaiting the assent of the President for it to become law, also empowers oil firms, as parts of cost-cutting measures, to refuse to fund the host communities’ development trust fund to be set up mandatorily by the companies, and also to slash the number of members of the Board of Trustees.

In the area of the abolition of the payment of gas flare penalties to host communities, the PIB contained a number of new clauses which expressly stated that the penalties by operators in the midstream petroleum industry, would be determined by and paid to one of the two petroleum industry regulators, in this case, the Nigerian Midstream and Downstream Petroleum Regulatory Authority.

The PIB also directed that upon receipt of the penalties, the Nigerian Midstream and Downstream Petroleum Regulatory Authority (The Authority), should transfer the money to the soon-to-be-created Midstream Gas Infrastructure Fund, who is saddled with the responsibility of determining how the funds would be utilized.

It also stipulated that penalties collected by the upstream petroleum industry regulator, the Nigerian Upstream Regulatory Commission (The Commission), within its jurisdiction, should be transferred to the Midstream Gas Infrastructure Fund.

However, it stated that the fund would only be invested in midstream gas infrastructure projects in the host communities of the sanctioned oil companies, effectively ruling out the use of the funds for other developmental needs of the communities.

Specifically, the PIB stated that: “any other matters as may be determined by the Authority pursuant to this Bill which includes imposition of gas flare penalty arising from midstream operations which shall be for the credit of the Midstream Gas Infrastructure Fund, and shall be utilized for midstream gas infrastructure investment within the Host Community of a designated facility.

Furthermore, in the aspect of host community development trust fund, a new clause was inserted in the PIB which mandates The Commission and The Authority to include, while making regulations on host communities’ development, a grievance mechanism to resolve disputes between oil firms and their host communities.

The mechanism for dispute resolution, according to the PIB, empowers oil companies to single-handedly make a series of adjustments regarding host communities development trust fund, to enable them to reduce expenditures where the available financial resources for administration of the trust fund are insufficient to fund the ongoing operations.

The House of Representatives’ bill had earlier mandated oil firms to set aside an annual contribution of five per cent of its actual annual operating expenditure of the preceding financial year in the upstream and two per cent in the midstream and downstream in respect of all petroleum operations, for the host communities’ development trust fund. The Senate’s version, which was finally adopted, had recommended three per cent.

The bill went ahead to state that the oil companies can singularly adopt cut-costing measures, whenever they feel they have insufficient finances for the trust fund, by reducing the number of members of the Board of Trustees and frequency of meetings.

The companies were also empowered to refuse to fund the host communities’ reserve fund and not hire the respective fund managers.