Second Republic minister of Mines and Power and former chairman, Northern Elders Forum (NEF), Chief Paul Unuogo has expressed regrets for championing the course of President Muhammadu Buhari in 2015. He also advanced reasons for the choice of a former Senate President, Senator Bukola Saraki and Governor Bala Mohammed of Bauchi State as the northern consensus candidates of the PDP by the NEF. 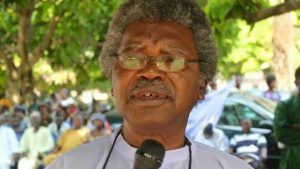 Addressing newsmen in Jos, Plateau State, on Sunday, Chief Unougo said the preference for Buhari in 2015 was not based on justification alone; it involved emotion adding that the President was a no-nonsense person and the people then felt he was the right person to stir affairs of the country.

“Some of us that went for Buhari risked our lives; many of us are disappointed and I am too old not to speak the truth. We are disappointed with the performance we have seen by the government led by President Buhari.

“He could have done better but he didn’t do as we expected him to. History will judge that he has total support from his people, some of them took a risk. I took the risk of leading a delegation to the United States of America to plead his course because of what he had done in the past.

“We produced Major General Buhari (retd), I led a delegation from Nigeria to the United States of America, I know the problem we had with the US, many of our elders stayed behind and refused to follow us. It fell on me to lead the delegation. I told the US why it is proper that America should respect the voice of the North because the north is a powerful geopolitical entity.

“They argued that he was a religious fanatic, that he would bring trouble and I said no. I addressed the Congress for General Buhari. So what we are doing is not different from the role we had played in the past,” Unongo said.

On the controversy trailing the endorsement of Saraki and Bala Mohammed as the northern consensus candidates of the PDP, Unougo explained that the decision was taken in the interest of the North and the North-Central in particular to foster its unity.

“Both Saraki and Bala stood out; we felt that a person who was a former senate president and two-term governor of Kwara state and performing governor of Bauchi state would be a better choice of the North. We felt we should present the two and let them choose among themselves.

“With somebody from the Middle Belt that is Senator Bukola Saraki, we felt he was qualified for the interest and unity of the North. The Northern Elders Forum has competent elders, I cannot speak for those that were not there when the decision was made, but by the people I saw there, I felt everyone was represented.

“I was there, Professor Ango Abdullahi was there and many others and we gave our views. If our able and qualified elders like Yahaya Kwande felt we didn’t do well, they can go ahead and submit their own fresh names and we shall look into it but we felt we have represented all members.

“We are looking at it from the point of view of keeping the north united and making everybody have a sense of belonging. The decision was taken within the context of what is best for the Middle Belt and the north at large and was correct in terms of practical applications and past experience.

“It was correct for the north to say it is time for the people of the Middle Belt to produce among our children that are contesting for the presidency and it is proper for our children to refer to us and we advise them accordingly,” he said.

The elder statesman further explained that the NEF advised that the candidate should come from the Middle Belt hence the choice of Saraki and Bala.