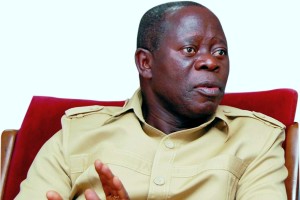 Governor Adams Oshiomhole of Edo State has vowed to lead the workers in protests against wage reduction by any state governor who attempts to reduce the national minimum wage of N18, 000.

Oshiomhole’s decision comes after the two labour unions in the country unfolded plans to present a new minimum wage proposal to the Federal Government for promulgation into law, the President of the Nigeria Labour Congress (NLC), Ayuba Wabba, has disclosed.

Oshiomhole told labour leaders that he was ready to back the NLC in protests against his governor-colleagues.

His words: “I have told my fellow governors that when the going gets tough, everybody will answer his father’s name. I am not and I will not support any government, any governor, federal or state that misunderstood the problem to focus on the weakest link.

Be assured that you can count on me. If you want to organize protest, I will join. I will not only join to protest against refusal to pay minimum wage, but to press for the idea of minimum wage to be sustained.”