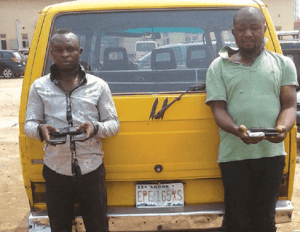 A Lagos resident was dispossessed of her phones in a nonviolent manner not previously known in the city. She penned her experience for FIJ. On Wednesday, 30th June, around 8:30am, I fell into the hands of very innocent-looking ‘One Chance’ operators. I shall not forget the day in a hurry. It was a carefully orchestrated crime.

The official car that I share with my colleague was unavailable that morning and as work was barely eight minutes away from home, I decided to hop into a bus. On getting aboard, the first thing I heard was “Madam, they’re fighting in front [sic]; keep your bag way from the window.”

The conductor seemed deeply concerned on my behalf and I assumed he was just trying to avoid any incident; it would not be the first time passengers, drivers or conductors would express such concerns.

Believing there was a potential security threat in front, the bus became a safe haven for me. I immediately obeyed and kept my bag securely beside me; I even put my left hand over it.

Few seconds in, the conductor started distracting me by saying my door had refused to lock and they needed me to hold it while they opened and slammed it repeatedly. I joined in after a while with my right hand, then immediately, the conductor asked me to use the other hand to hold the door from the top. I removed my left hand which had been resting on the bag on impulse. There was no time to think. The noise from the repeated slamming began to irritate me so I told them to leave the door alone, thinking to myself “If I perish I perish”.

What I didn’t know was that by then, someone had removed my personal and official iPhones from my bag, which I had kept by my left-hand side while struggling with the door on my right.

Few minutes in, the conductor started accusing me of not having paid enough for the trip (bear in mind that the trip would cost a flat rate of N100) but now they were asking for triple what I had paid. When I refused, he opened the front door and attempted to drag me out of it, saying: “She no wan pay, make she commot.”

At this point I was so confused I looked at the driver who looked so innocent he could be the firstborn of Jesus; he offered nothing beyond “Madam, there is nothing I can do.”

I had had more than enough to make up for the “required” fare but it seemed very unreasonable; I just needed an explanation: union fees? Fuel hike? Why now? You already took the payment, a tip for unsuccessfully helping me lock my door? I kept engaging with them until the bus parked and they insisted I simply had to get off and they would happily refund my N100. To preserve my dignity and since I was seeing my office right ahead, I decided to let it go before things escalated beyond measure. They immediately sped off but I didn’t care. I walked on for a couple of minutes then I opened my bags because in my reality, my phones ring perpetually, but at this point, everything had simply gone…silent.

My phones were gone!!!! Not the 300 power banks I carry around or my MiFi device; they found my phones in my hole of a bag and took the good ones! I had never felt so defeated in my life and talking about it still hurts. Chai!

However, I’m writing this with the hope that I can help one or two people outsmart them. It’s enough revenge for me. I’m really, really upset!!!