A former Nigerian senator has blamed the government for the Monday night attack on a passenger train.

Shehu Sani, formerly of the ruling All Progressives Congress (APC) said the attack was “preventable”.

The train was travelling from Nigeria’s capital city Abuja to Kaduna when a rail track was blown off and was attacked by terrorists. 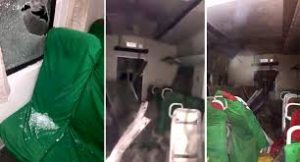 Sani was travelling on the Abuja-Kaduna route when gunmen blew up a section of the track last October in a similar attack. He suggested that the government’s failure to act on the promises made at the time emboldened the attackers.

“Lessons weren’t learned from the last tragedy,” Sani tweeted on Tuesday morning. “The trains weren’t equipped with sensors to detect explosives and the promise of the use of helicopters to protect the trains was abandoned.”

But Nigeria’s Information Minister Lai Mohammed said the travelling train was safe and comfortable hours before the attack.

“We are proud that in our time, Nigerians are once again able to travel by rail, this time in total comfort and safety,” Mohammed said at press briefing on Monday.

Anas Iro Danmusa, who claimed to be on the train, said the attack started about 8:00 pm between Katari and Rijana. Rijana is about 55 kilometers south of Kaduna city. There are no official confirmations on the number of people that died, injured or kidnapped.

But Sani said he spoke to eyewitnesses that confirmed that some passengers were killed or kidnapped.

Meanwhile, there are reports that a doctor, Chinelo Megafu, died on the train after being shot. Megafu initially tweeted that she had been shot on the train before her death was announced hours later.

Two officials of Kwara State chapter of Trade Union Congress were also shot and killed in the attack. Their remains have been deposited at the 44 Regiment Hospital in Kaduna. The military hospital is also treating persons injured in the attack.

Mr Mohammed Barau, a resident of Ungwan Rimi area of Kaduna, told the government-owned News Agency of Nigeria (NAN) that the whereabouts of his younger was unknown and lashed out at the government for not providing necessary information.

“By now, the government should have released a comprehensive list of people killed, those injured, as well as the number of people evacuated,” Barau said.

“At least, when this is done, it would give us some peace of mind, but we have not heard anything yet.”

Multiple gory videos reportedly from the train are being circulated on social media. “I just spoke with a survivor who is a civil servant working with a public Library. She narrated that the terrorists specifically targeted the Business Class coach. They kidnapped some persons including a “white man” & killed those who resisted while she pretended to be dead,” Sani said.

A Kaduna State’s Commissioner, Ministry of Internal Security and Home Affairs, Samuel Aruwan, said in a statement that the Nigerian military was able to “successfully” secure the train and the passengers on board.

“The Government of Kaduna State will be liaising with the Nigerian Railway Corporation (NRC) to ascertain the list from the passengers’ manifest for efficient tracking. This is to acquire an accurate inventory of all passengers and their actual status,” Aruwan said.