Obiano Denied Me of My Entitlement as Deputy Gov –Okeke 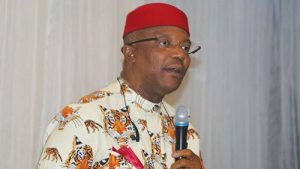 Dr Nkem Okeke, the immediate past deputy governor of Anambra State has said he dumped the All Progressives Grand Alliance APGA because he needed to serve at the national level. Okeke, who left the APGA shortly before the state governorship election in November 2021, expressed gratitude to the people of Anambra and his former boss, Willie Obiano, for the opportunity to serve the state.

Addressing journalists in Awka on Friday, Okeke said he had no regrets defecting to the All Progressives Congress at the time he did, because he was no longer enjoying the goodwill and confidence of Obiano.

Okeke, who revealed that he knew that Anambra was not in a good shape, regretted that the advice he gave on critical issues concerning the state were not taken.

He said, “The governor is the all and all. The deputy dances to the whims and caprices of the governor. I have always believed in giving my best in whatever capacity I find myself. It has always been my plan to join the APC. It is the question of what I do next after serving as deputy governor.

Okeke commended the former governor for not replacing him when they were going for the second term, despite the huge pressure on him to do so.

“There was massive pressure on Obiano to replace me as we were going for the second term, but he did not do so and that made me the only two-term deputy governor of the state. The eight years have come and gone although things did not really work out the way it was expected, but looking back, I have no regrets; I can only thank God and the people of Anambra,” he stated.

Okeke lamented that as a deputy governor, he was not getting his entitlements because the former governor refused to approve them, adding that he hopes that the current governor would look into the matter at the right time.

He stated, “I was not even receiving my entitlements while I was serving and I am not sure I will get any severance allowance. I don’t even know what is there for me. In the last couple of months, before our administration came to an end, I wasn’t getting my overhead as the governor refused to sign the warrant for my overhead.

“But I am hoping that Governor Chukwuma Soludo will do that when the time comes. For now, I don’t want to add to his problems and if they don’t come eventually, life goes on. I didn’t join politics for entitlements, but to contribute my quota.

“I thank God that I left the party as of the time I did. People blaming me for leaving or accusing me of betraying the party are not being fair to me.”

“I knew some people were not happy with that decision, but I look at things from all perspectives. I put into consideration what the APC has done for the people of Anambra, particularly the Second Niger Bridge, and I know what that bridge will do for our state when it is completed.”

On the issue of the huge debt incurred by the last administration, the former deputy governor said some of the projects that contributed to that like the airport and the international convention centre were not necessary and he advised against them.

He said, “That you saved N75bn or N100bn does not mean anything if you do not invest it in productive ventures. As of the time the airport project and the convention centre were going on, I advised against them, but my advice was not followed.

On the issue of Obiano and the Economic and Financial Crimes Commission, Okeke said he knew things would end up that way, though he did not expect them to happen the way they did.