The Leader of the proscribed Indigenous Peoples of Biafra (IPOB) has dragged one Dr. Adebimpe M. O. before the Medical and Dental Council of Nigeria for alleged professional misconduct and abuse of confidentiality.

In the petition written by his Lawyer, Maxwell Opara and dated 27th of March, 2022, the IPOB Leader who is currently in SSS detention lamented the dehumanizing experience he has been made to go through with respect to his health in the hands of the SSS and how Dr. Adebimpe who was procured by the SSS to attend to his failing health allegedly carried out sharp practices which contravene known medical ethics statutorily provided for in the Medical and Dental Practitioners Act. 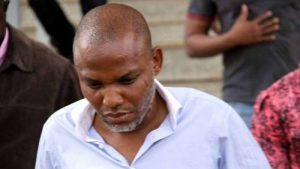 In the petition sent to the Registrar of the Council, Nnamdi Kanu claimed that since he took ill in the custody of the SSS, the SSS have been using the instrumentality of the doctors attached to their facility and others whose services were procured by them to maltreat, abuse and subject him to acts which amount to professional misconduct and for which those doctors should be investigated and disciplined.

“When our client became ill, he applied to the SSS to allow him bring in his personal doctor, who knows his medical history, to examine and diagnose the cause of his ailment. The SSS disregarded our Client’s request and proceeded to bring in their own medical doctors to attend to our client against his consent.

The said SSS doctors forcibly took our client’s specimen and proceeded to carry out their diagnosis. Thereafter, our client waited to be informed about the outcome of the forced medical diagnosis, but the said doctors never came back to inform him, and upon his request to know the outcome, the SSS and the doctors refused to disclose the cause of his health condition to him. Even when our client’s medical report came out, same was not given to him. Wherefore, our client had every reason to believe that the SSS and their doctors were handling his ill health unprofessionally.”

According to the petition, following these unconscionable line of events, the decided to institute an action against the SSS for threatening his right to life by depriving him access to a competent medical doctor and also preventing him from accessing his medical report. The Lawyer further wrote; “Immediately the SSS became aware that our client had filed a suit in court, they quickly brought up a purported medical report dated 15th March, 2022 with reference no: C/614/T/1/70, which report was prepared and signed by one Dr. Adebimpe M. O for Director Medical Services. The said medical doctor indicated that he signed the medical report for the director medical services of SSS.

“When the medical report was eventually made available to our client, he perused same and discovered that the report was prepared by Dr. Adebimpe M. O. who was not the doctor that attended to him and as such was not in an ethically capable stands to write nor signed the said medical report, more so, when the said doctor knew nothing about his medical history. Our Client confronted the said doctor Dr. Adebimpe M. O on his observations, but the Dr. Adebimpe did not respond to his complains. The said development greatly perplexed our client; more so, when he noticed that Dr. Adebimpe did not take cognizance of the fact that he had suffered potassium chloride deficiency, for which he was under daily medication and a condition which the SSS knew about, but same was not mentioned anywhere in the medical report.”

The petition which was also accompanied with a 5-paragraph affidavit deposed to by the Lawyer, also noted that the complained acts by the said Dr. Adebimpe contravened the provisions of the Medical and Dental Practitioners Act and should therefore warrant disciplinary measures.

“Hence, the following represent the points of agitation in this complaint: 1. Should a medical doctor lower his ethics of confidentiality to satisfy the illegal yearnings of his employer? 2. Is it proper for a doctor to

diagnose or take a patient’s samples without his consent? 3. Is it proper for a doctor to disclose to a third party his patient’s medical records or report without the patient’s consent? In this petition, it is our informed position that Dr. Adebimpe M. O. has contravened Rules 8, 19, 26, 28 and 44 of the Code on Medical Ethics in Nigeria made pursuant to section 1(2)c of the Medical and Dental Practitioners Act.”

He therefore prayed the Council to commence proper investigations to unravel if Dr. Adebimpe is a licensed Medical doctor, to also set up a team of expert to review the medical report produced by her with a view to ascertaining its authenticity, and to investigate her culpability with respect to the alleged misconducts, meting adequate disciplinary measures against her if found culpable.