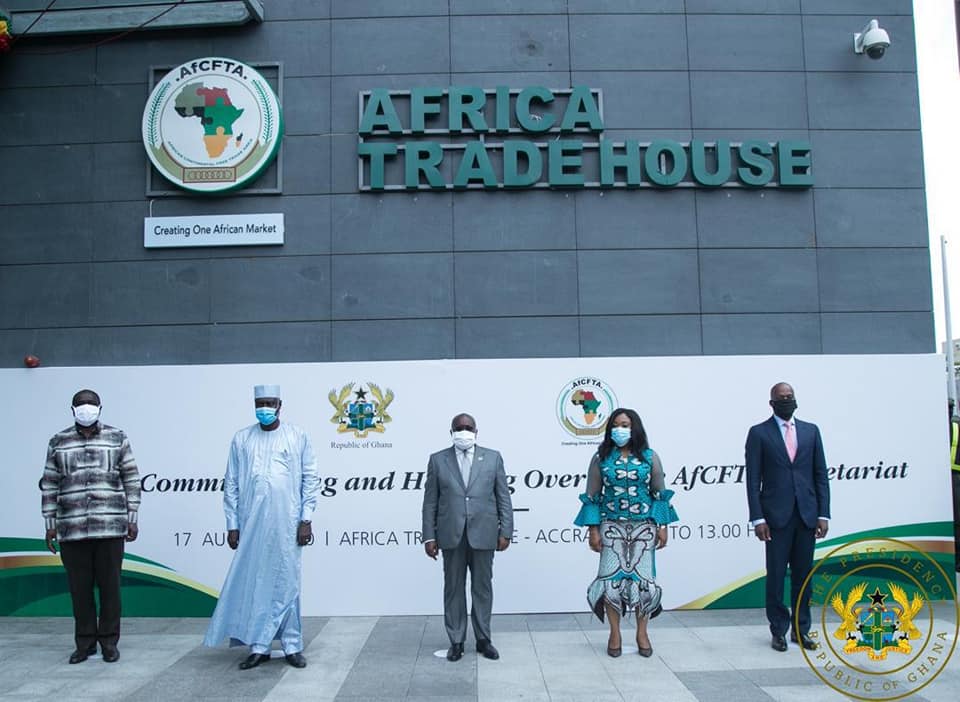 This call was reiterated against the backdrop of the commissioning of the permanent secretariat of the African Continental Free Trade Area (AfCFTA) by Ghana’s President Nana Akufo-Addo and Moussa Faki Mahamat, Chairperson of the AU Commission as they reiterated the importance of the body to the continent’s economic transformation agenda.

The Nigerian business owners however noted that the discriminatory practices of the Ghanaian government targeted against the nationals of other African countries runs counter to the spirit of both Economic Commission of West Africa States (ECOWAS) Protocols and that of the African Continental Free Trade Area (AfCFTA). A cardinal aspect of the ECOWAS Protocols stipulated among other things the right of community citizens to enter, reside and establish economic activities in the territory of member states and outlined a three- phased approach to achieve the “complete freedom of movement” envisaged by the treaty.

The Nigerian government through the Minister for Foreign Affairs, Geoffrey Onyeama, in a reaction posted on his Twitter handle said that “Nigerian Government has watched with dismay the painful videos of the forceful closure of the shops of Nigerian traders in #Ghana, promising that urgent steps will be taken.

Tolu Akande-Sadipe, Chairman, Nigerian House of Representatives Committee on Diaspora Affairs, had promised an investigation into the forceful closure of businesses of Nigerians in Ghana. She stated that the act was against and will inhibit the intent of ECOWAS. “House Committee on Diaspora and the entire @HouseNG 9th Assembly will do whatever is within our scope to ensure that this is investigated and the Government of Ghana @GhanaPresidency takes responsibility for policies that could lead to the destruction of the intents of ECOWAS,” she said.

According to the President of Nigerian Traders Union in Ghana Chukwuemeka Nnaji said Nigerian shop owners were being asked to provide registration of business taxes, resident permit, and standard control and Ghana Investment Promotion Council registration. “Most of our members do not have the GIPC registration, because it requires $1m cash or equity and they gave us 14 days within which to regularise,” Nnaji added.

Some analysts are of the view that Ghana’s discriminatory attitude towards fellow African countries should be enough to protest against the setting up of the AfCFTA Secretariat in that country. Ghana was selected as the venue for the headquarters by African leaders during a Summit of AU Heads of states in Niamey in July last year, to launch the implementation phase of the agreement, which is expected to spur regional trade among member countries. Currently, 54 states have signed on to AfCFTA, out of which 28 have ratified.

Speaking at the event, the Ghanaian President, Nana Akufo-Addo said that “the economic integration of Africa will lay strong foundations for an Africa beyond aid. Africa’s new sense of urgency and aspiration of true self-reliance will be amply demonstrated by today’s ceremony.” He appealed to member states that have not ratified to do so before the next AU summit in December, “to pave the way for the smooth commencement of trading from 1 January 2021.”

The COVID-19 pandemic has heightened the importance of the success of the AfCFTA, the Ghanaian president said. “The destruction of global supply chains has reinforced the necessity for closer integration amongst us so that we can boost our mutual self-sufficiency, strengthen our economies and reduce our dependence on external sources,” he said.

AfCFTA, the world’s largest free trade area, has the potential to transform the continent with its potential market of 1.2 billion people and combined GDP of around $3 trillion across the 54-member states of the AU. Mahamat said the opening of the secretariat marked a milestone in the vision of Africa’s founding founders for continental integration. According to Wamkele Mene, the first Secretary-General of the AfCFTA, said the agreement offered an opportunity for Africa to confront the significant trade and economic development challenges: market fragmentation, small national economies, over-reliance on primary commodity exports, narrow export base, lack of export specialization, under-developed regional value chains and high regulatory and tariff barriers to trade. “We have to take action now. We have to take action to dismantle the colonial economic model that we inherited,” Mene reiterated.

The African Development Bank Group provided a $5 million institutional support grant to the AU towards the establishment of the AfCFTA secretariat which is located in an ultra-modern office complex in the central business district of the Ghanaian capital. “The African Development Bank congratulates the AU/AfCFTA on the investiture of the Secretariat hosted by Ghana on 17 August 2020.The Bank is delighted to be associated with this groundbreaking, game-changing, transformational continental initiative in furtherance of the objective to create the Africa we want,” said Solomon Quaynor, the Bank’s Vice-President for the Private Sector, Infrastructure and Industrialization. “Our support to the AfCFTA is in keeping with the Bank’s role of continental leadership in helping to build special-purpose vehicles that are critical to the successful implementation of crucial institutions to accelerate Africa’s economic development objectives,” Quaynor added.

Analysts are of the view that if the African Union fails to call Ghana to order over this seeming reckless disregard for existing protocols within the region and continent at large, that it will set a very wrong precedent which other countries might use in future to justify similar actions, and this might truncate whatever efforts the continent is making towards a harmonized market. Moreso, Nigeria being the continent’s largest market and biggest economy might be pressured by its citizens to explore ways of reciprocating in kind or even pushing for a more damaging protectionist strategy, which will not augur well for both the West African region and the continent as a whole.