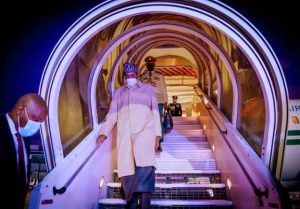 Some Nigerians staying in South American countries and some European countries are set to join a protest in Paris, the French capital today over the insecurity and poor policies of President Muhammadu Buhari’s administration.

The protest, codenamed #HarassBuhariOutofParis, has been slated for 12pm Paris time, which is being mobilised by various groups and individuals including former President Goodluck Jonathan’s aide, Reno Omokri.

A Nigerian has confirmed he is flying in from Rio De Janeiro from Brazil into Paris for the protest while others are joining in from other European countries contiguous to France.

On Monday, Omokri called for the #HarassBuhariOutofParis protest in the wake of Buhari leaving Nigeria for Paris on Sunday to attend the African Finance Summit.

The protesting Nigerians are angry that President Buhari left the chaotic state of Nigeria burning with insecurity and failed leadership, only to attend the Africa Finance Summit In Paris, France in a four-day visit.

“Get ready to join us today for #HarassBuhariOutofParis by 12 noon Paris time, at the Temporary Exhibition Centre, front of the Eiffel Tower. Buhari can’t be globetrotting, while Nigeria is drifting. He should go back and fix Nigeria! And if he can’t do it, let him honourably resign

“This made my day. This is a patriot. Flying all the way from Rio de Janeiro to join the #HarassBuhariOutofParis protest tomorrow, 12 noon, at the Temporary Exhibition Centre, at the Eiffel Tower. @MBuhari can’t be globetrotting, while Nigeria is drifting. Go back and fix Nigeria,” Omokri said on Twitter on Tuesday morning.

On April 2, a crowd of Nigerians in the United Kingdom had also stormed the Abuja House, 2 Campden Hill, Kensington, London, demanding that President Buhari, then on medical leave, immediately return home.

#HarassBuhariOutOfLondon had trended after the president departed Nigeria for the UK to undergo a medical checkup.

Human rights activist, Omoyele Sowore, had also advised Nigerians in the UK to occupy the London hospital where President Buhari planned to have his medical checkup.

Sowore had described the medical trip to London as a waste of resources, noting that the President should do his checkup in the “world-class” hospital he built in Nigeria since he came to power.