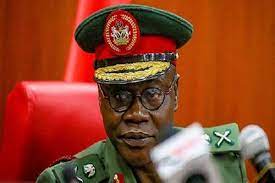 The Nigeria Army (NA) on Friday pulled out 14 Infantry generals from active service in a colourful ceremony in Kaduna.

The retired officers who were pulled out in a parade at the Jaji Military Cantonment, Kaduna, consisted eight Maj-Generals and six Brigadier-Generals.

The pulling-out parade was in line of activities marking the end of the seven-day Combat Arms Training Week.

Combat arms are the Infantry and Armour Corps of the Nigerian Army which are specially and directly involved in battle.

Speaking on behalf of the pulled out Generals, retired Maj.-Gen. Ahmad Muhammad said the pulling out parade was a recognition of their positive contribution to the Infantry Corps when they were in active service.

Muhammad, a former Commander of the Infantry Corps, added that the honour of pulling them out was also borne out of their positive contributions to the nation while serving at respective commands in the Nigerian Army.

“Pulling us out in such colourful event is a way of giving us back what we have given to the system. The strategic intent is to encourage those coming behind us to work hard, diligently,” he said.

Muhammad noted that as retired officers, they would continue to respond to calls towards contributing positively to the development of the Infantry Corps and the Nigerian Army at large.