Ministers affected by the presidential directive to resign after declaring their interest to contest in 2023 general elections have today to turn in their resignation letters in spite of President Muhammadu Buhari’s directive giving an ultimatum ending Monday, May 16.

This is because, in the adjusted schedule of activities and timetable of the All Progressives Congress (APC), today is the last day for submission of completed forms and accompanying documents, while screening of aspirants for all the offices is scheduled for Saturday and Sunday and the publication of screening results to be done on Monday. 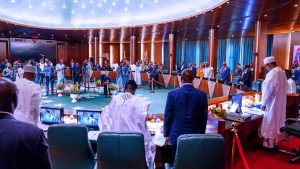 It was gathered that members of the Federal Executive Council (FEC) with political aspirations may have to appear before the APC screening committee with copies of their letters of resignation and acknowledgement as part of the additional stipulations aspirants are expected to comply with.

Hours after the presidential directive, the Federal Government, yesterday, released detailed list of categories of political appointees who are expected to resign from their positions on or before Monday. The latest directive was contained in a circular with Ref.No.SGF/OP/I/S.3/XII/173, signed by the Secretary to the Government of the Federation, Boss Mustapha, and dated May 11.

According to the circular, the affected persons include all ministers, heads and members of extra-ministerial departments, agencies and parastatals of government, ambassadors, as well as other political appointees, who desire to contest for elective offices.

The SGF directed that the concerned ministers hand over to ministers of state where they exist or to the permanent secretary, where there is no minister of state, for smooth running of the machinery of government and foreign missions.

According to Mustapha, “Ambassadors shall hand over to their deputy heads of mission or the most senior foreign service officer in line with established practices while heads of extra-ministerial departments, agencies and parastatals are to hand over to the most senior director/officer as may be peculiar to the organisation, in line with the service wide Circular No. SGF.50/S. Il/C.2/268 of December 4, 2017. The contents of this circular and the incidental directives take effect immediately.”

Amaechi was said to have resigned on Wednesday night. However, a tweet from his aide, Israel Ibeleme, debunked the report. When contacted yesterday, the aide said his boss was in the office yesterday (Thursday), but would drop his resignation today or tomorrow.