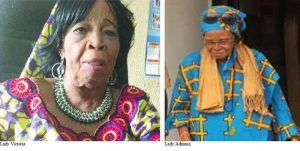 The former first lady passed on Monday at 97. She would have been 98 on November 21, 2021. She hailed from Umuahia North Local Government Area of Abia State.

Her son, Ambassador Tom Aguiyi-Ironsi announced her death in a short letter to Governor Okezie Ikpeazu of Abia State. “My family wishes to inform you that it has pleased God to call to glory Noble Lady Victoria Aguiyi – Ironsi to eternal rest. She passed on at the early hours of today August 23, 2021”, he said.

Aguiyi-Ironsi, her husband was the Supreme Commander of the National Military Government for six months before being overthrown and assassinated in the 1966 Nigerian counter-coup.