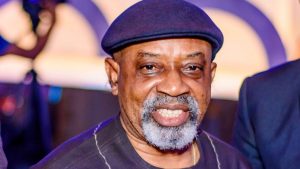 The Minister of Labour and Employment, Senator Chris Ngige has commiserated with the Trade Union Congress (TUC) over the death of its Secretary General, Comrade Musa Lawal Ozigi and Kwara State Chairman, Comrade Akinsola Akinwunmi, who were killed in the Kaduna train terror attack.

In a condolence letter to the union, the minister described the death of Ozigi and Akinwunmi as a huge loss to Nigeria’s tripartite community, even as he described the late Ozigi as “a dogged and consummate labour leader.”

Ngige said his tragic death at the unfortunate Kaduna rail terror attack, “is a devastating blow at a time Nigeria’s  tripartite is ever united in finding solutions to the bestriding challenges in the world of work, nay the nation at large.

“We shall all miss his contributions. Ozigi’s self-effacing personality often belied his depth of thought and ideas. His seminal contributions to discussions on labour issues, no doubt, earned him a place in over two decades of service to unionism starting from the Construction and Civil Engineering Senior Staff Association, where he was Secretary General to joining the Congress in 2012.”

In the same breath, the Minister of Humanitarian Affairs, Disaster Management and Social Development, Sadiya Umar Farouq,  has condoled with the families and victims of the attack, and therefore, directed the immediate deployment of the National Emergency Management Agency (NEMA), Northwest Zonal Office team, to  the  scene and also visit the victims.

The Minister, who decried the incident as horrific, stated, “My heartfelt condolences to the families of those, who lost their lives in the attack. May God console and strengthen them at this time of grief. I also pray for the wounded and hospitalised persons, who sustained various degrees of injuries that they recover quickly.”

Eight victims were referred to 44 Nigerian Army Reference Hospital, Kaduna, while two of the victims, who sustained gunshot wounds and fractures, were still hospitalised.

The hospital management also confirmed the admission of 25 victims with different degrees of injuries.

A representative of the Chief Medical Officer of the 44 NARHK hospital, said while some had undergone surgery, other victims had been treated and under observation.