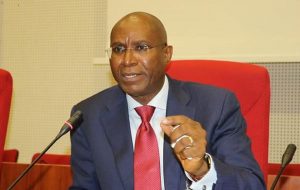 DEPUTY Senate President and chairman of the Senate Committee on the review of the 1999 Constitution, Senator Ovie Omo-Agege, has explained the reason the ninth National Assembly may not be able to endorse a new constitution for the country.

Senator Omo-Agege disclosed this on Thursday, in his opening remarks at the national public hearing of the Senate committee in Abuja.

Certain eminent Nigerians and sociocultural organisations have dismissed the existing constitution as unworkable and advocated a new document.

Omo-Agege, however, noted that the National Assembly is only vested with statutory powers to amend the constitution and not to write a new one for the nation.

He said: “Now, some of our compatriots have urged that rather than amending the constitution, we should make a new constitution all together. We respect this opinion and we believe it is a most desirable proposition. However, we are conducting this exercise in accordance with the extant legal order, which is the 1999 Constitution.

The deputy Senate president who urged Nigerians to use the opportunity provided by the ongoing exercise to ventilate their views, assured that no genuine submissions from any individual or group would be discountenanced. In his goodwill message, Chief Justice of Nigeria (CJN), Justice Ibrahim Tanko Muhammad, represented by Justice Ejembi Eko of the Supreme Court, demanded review of certain laws.

The CJN who lamented that Justices of the apex court are overwhelmed with cases, specifically asked the lawmakers to take cognisance of Paragraph 10.1 of the National Judicial Policy of the National Judicial Council (NJC) which states that: “Outdated laws should be amended to reflect the present-day reality in Nigeria and enhance the Administration of Justice.”

The CJN also asked the National Assembly to alter the constitution to mandate the NJC to fix and review judges’ salaries every four years. In the paper he presented as recommendations of the judiciary, the CJN submitted before the Senate committee, 45 constitutional amendment proposals on reforms in the Nigerian judiciary were submitted.

He lamented that because the Act guiding the NJC have not been reviewed with effect from 2008, judges’ salaries have remained the same for about 13 years. He asked that those to be appointed Supreme Court Justice should not be less than 25 years of post-call to Bar. All the appeals from the Court of Appeal to the Supreme Court should be by leave of the Supreme Court and the application for leave can be determined by three justices of the apex court sitting in the chamber.

He called for the number of the Court of Appeal Justices pegged at 49 in the constitution under Section 237 to be amended now to not less than 100 justices.

THE Conference of Speakers of State Legislature in Nigeria sought an amendment to impeachment procedures of speakers of the state houses of assembly. Honourable Abdullahi Wuse, Speaker of Niger State House of Assembly, made the call in Abuja on Thursday. Abdullahi, who spoke on behalf of conference of speakers, said there is the need to strengthen procedures of removing a speaker.

He noted that the process of removing a speaker of a house of assembly without fair hearing is an embarrassing situation that had always played out in Nigeria.

“The conference is proposing an amendment to Section 92(c) of the constitution. The speakers deserve fair hearing. So, we are calling for the procedure where the speaker should be heard and the allegation properly investigated and, if found indicted, then a speaker can be removed,” he said.