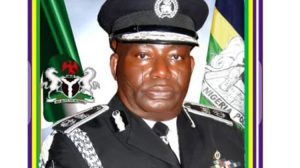 Widow of 42-year-old Oguchi Unachukwu, who was allegedly murdered by an air force officer in Imo State, Mrs Ijeoma Unachukwu, has asked the state Commissioner of Police, Abutu Yaro, to ensure that the killers do not escape justice.

Oguchi, who was based in Hamburg, Germany, was heading to the Sam Mbakwe Airport, Owerri, on Monday, to catch a flight to Lagos preparatory to boarding a Germany-bound flight same day when he was shot in the forehead at point-blank range by a suspected air force operative.

The remains of the deceased was deposited in a morgue of the Federal Medical Centre, Owerri.
The deceased was said to have been in Owerri for about three months and dedicated his second daughter in church two months ago.

In a petition dated June 1, Ijeoma disclosed that she witnessed the incident, adding that she was in the same vehicle with her husband when he was killed.

She said her husband was shot by the trigger-happy air force officer in an unprovoked execution style in front of her and their two children, who were also in the vehicle at the time of the incident.

The widow said before reaching the airport checkpoint, they had passed three other military and police checkpoints which cleared and passed them.

Ijeoma stated that the air force officer had no reason to shoot her husband after he stopped when the officer flagged him down.

The family’s lawyer, Ihediohanma Akponye, who signed the petition, said it had been copied to the state Governor, Senator Hope Uzodimma, and authorities of the Nigerian Air Force, as well as the Sam Mbakwe Airport.

Akponye insisted that if no punishment was meted out to the officer who fired the lethal shot, he would go about committing more crimes.