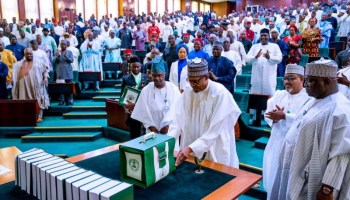 The National Assembly kept mum on Monday as BudgIT Nigeria, a civic-tech organisation, announced its discovery of 460 duplicated projects valued at N378.9bn in the 2022 Appropriation Act, accusing the legislature of padding the Federal Government’s budget, among other allegations.
The organisation called on the citizens, civil society organisations, the private sector and the international community to “urgently prevail on the National Assembly and Presidency to urgently amend and eliminate the loopholes in FG’s 2022 approved budget”. 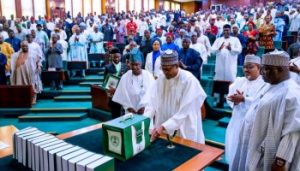 It raised the alarm in a statement signed by its Communications Associate, Iyanu Fatoba, and issued via its Twitter handle.
BudgIT said, “Our preliminary analysis of the 21,108 capital projects in the 2022 approved budget revealed 460 duplicated projects amounting to N378.9bn. Recall that BudgIT observed 316 duplicated projects inserted into the 2021 FG budget approved by NASS.
“ICPC verified 257 duplications, while the Budget Office confirmed the existence of only 185 duplicated projects worth N20.13bn, after which it informed the public that funds were not released for the projects in 2021.
According to the organisation, the occurrence of inflated projects amounting to billions of naira directly linked to the State House and the Presidency is a cause for concern.
“Examples include the N20.8bn requested by the Presidency to construct a 14-bed presidential wing at the existing State House Medical Centre, N28.72m requested for the purchase of two units of 10kg washing machine and six units of LG televisions in the State House Lagos Liaison Office, among others,” it said.
BudgIT quoted the National Agency for Great Green Wall, which was set up to prevent land degradation and desertification afflicting 11 states in northern Nigeria and to boost food security in the country, as saying N1.3bn or 64 per cent of its capital budget was dedicated to purchasing motorcycles, street lights and other projects outside its mandate.
It said, “This is disingenuous, especially as communities in these states are being ravaged by bandits and terrorists who often arrive in motorcycles.
“Likewise, four recreational parks under the Ministry of Environment have a total allocation of N67.8m to construct ‘gun armouries’ in Cross Rivers, Kaduna, Borno and Yobe States, even though the Ministry of Environment is not a security agency.
“This raises the question – Why is the ministry of environment stashing guns in recreational parks in these states in an election campaign year and at a time when the country is facing unrest in nearly all of the 36 states?”
According to BudgIT, the River Basin Development Authorities under the Ministry of Water Resources, set up to facilitate the management of water resources for agriculture, has instead metamorphosed into an agency that constructs roads and supplies street lights.
“A cumulative total of N6.3bn was allocated to supplying street lights in 73 communities across the 36 states, while N14.8bn was allocated for the construction of 219 roads across 36 states; whereas the majority of the roads are the responsibilities of state and local governments and not the Federal Government,” it said.
BudgIT’s Country Director, Gabriel Okeowo, said, “The loopholes for fraud in the 2022 Federal Government budget is a crime against the 86 million Nigerians living below the poverty line, an injustice to hardworking taxpayers and an open mockery of countries and lending institutions that intend to borrow NigeriaN6.29tn in 2022.”
President Muhammadu Buhari, while assenting to the 2022 Appropriation Bill and the 2021 Finance Bill passed by the National Assembly, expressed strong reservations on the “worrisome changes” made by lawmakers in the budget.
When contacted by our correspondent on Monday, the Chairmen of the Senate and House Committees on Media and Public Affairs, Senator Ajibola Basiru and Benjamin Kalu, neither picked telephone calls nor replied messages sent to them to get the National Assembly’s reaction to the discovery.
Kalu had recently told newsmen in his reaction to the President’s complaints that the parliament had the constitutional powers to tinker with funds and projects in an appropriation bill.