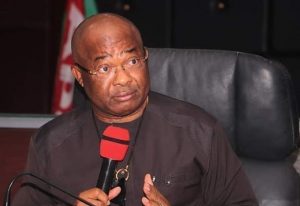 Governor Hope Uzodimma of Imo State has said that the National Agency for Science and Engineering Infrastructure (NASENI) holds a lot of potential for Nigeria’s digital economy and technological take-off if properly harnessed.

The governor spoke on Tuesday when he received in audience a team from NASENI led by the Executive Vice Chairman, Prof. Mohammed Sani Haruna, who paid him a courtesy call at the Government House Owerri.

Governor Uzodimma said what NASENI has been able to do within a short period of coming into existence is an indication that Nigeria still has hope and that the country can navigate away from analogue to digital economy.

The governor however charged the team to prioritise the technological needs of Nigeria along the line of agricultural, security, manufacturing, marketing, and ICT sectors.

Governor Uzodimma specifically urged the Federal Government to consider making NASENI the umbrella body that will chart a technological course for Nigeria in line with current economic realities.

Congratulating them for achieving several feats in their short period of establishment, he described their works “as encouraging and assurance that Nigeria still has hope.”

Governor Uzodimma who patiently listened to a presentation that lasted for more than one hour by the Executive Chairman of the Institution, Prof. Haruna congratulated NASENI for rising up to the digital infrastructural demand of Nigeria.

He appealed to them to “prioritize the technological needs of the nation to capture what is mostly in demand by the nation today, especially using technology to fight insecurity.”

The Governor challenged NASENI to take over some moribund science and technological establishments of the nation and manage them to produce results.

On NASENI’s reason for coming to Imo State, the Governor assured the team of the State’s support, promising to raise a five man team to work with them and chart a road map on the science and technology needs of Imo. He also urged NASENI to ensure that it has sufficient presence in Imo State.

Earlier in his presentation, Prof. Haruna showcased the Agency’s achievements in the areas of power generation, transport, education and agricultural development. He presented a solar powered modular manufacturing plant as well as other solar panel productions.

In a PowerPoint presentation, the Executive Secretary showed the involvement of NASENI in collaboration with other National and Foreign Partners in Tricycle (Keke) production, helicopter production, computer production and other science equipment and machineries such as tractor repairs, maintenance and refurbishing.

He informed the Governor and other top government officials including the Deputy Governor, Prof Placid Njoku that they had come to seek partnership with the Imo State Government in any science and technology development that will be to the advantage of Imo people.