Miami Open: Fruhvirtova becomes youngest player in fourth round since 2004

Czech teenager Linda Fruhvirtova on Sunday became the youngest player to reach the last 16 of the Miami Open since 2004 when former world number one Victoria Azarenka retired from their third round match.

The 16-year-old arrived at the tournament with a world ranking of 279 but she dominated the two-time Australian Open winner, racing into a 6-2, 3-0 lead before the veteran Belarusian quit. 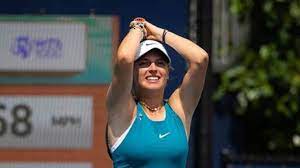 Azarenka, 32, who broke down in tears during her defeat to Elena Rybakina at Indian Wells earlier this month, looked out of sorts throughout against the impressive Fruhvirtova.

“I don’t know what happened at the end,” Fruhvirtova told AFP.

“She was struggling with some injuries. I don’t know but it was an honour to share the court with her.

“You never want to end the match this way but it happens. We shook hands and then she walked off.”

It was not immediately clear why Azarenka retired although later in the evening the former world No1, who also deleted her social media accounts in the wake of her problems at Indian Wells, released a statement citing personal issues.

“I shouldn’t have gone on the court today. The last few weeks have been extremely stressful in my personal life,” she said.

“Last match took so much out of me, but I wanted to play in front of a great audience as they helped me pull through my first match. I wanted to go out there and try but it was a mistake.

“I hope to take a break and be able to come back.

“I’m sorry to the fans for what happened as you were great to cheer for me. It was the only reason I decided to step on the court. I always look forward to the challenge and pressure of competition but today it was too much. I have to and will learn from this.

“I would like to congratulate my opponent and wish her best of luck in this tournament and beginning of her professional career.”

She had already scored an upset victory over Belgian 24th seed Elise Mertens in the previous round on Friday and remains full of confidence ahead of her fourth round match with Spanish fifth seed Paula Badosa.

“I am just happy to get through. New players are coming in and it’s exciting to see young players playing on the tour,” she added.

“These matches definitely help your confidence, especially at big tournaments like this. Do I think I can win it? Of course, that’s the mindset.

“I am playing to be the best in the world.”