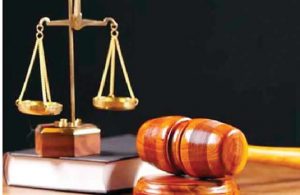 The Maiduguri Zonal Command of the Economic and Financial Crimes Commission, EFCC, on Tuesday, arraigned one Bukar Mohammed before Justice Aisha Kumaliya of the Borno State High Court, Maiduguri, on one count of obtaining N43,328,000 by false pretences.

In a statement signed by the head, Media and Publicity of the Commission, Wilson Uwajaren, the defendant allegedly converted the money entrusted in his custody for safe keeping to his personal use.

The charge reads,‘‘That you, Bukar Mohammed sometime in 2018 in Maiduguri, Borno State, within the jurisdiction of this Honourable Court fraudulently induced one Alhaji Ali Mohammed to deliver to you monies in Euros and Naira to the equivalent sum of Forty Three Million, Three Hundred and Twenty Eight Thousand Naira (N43, 328, 000.00) only, under the false pretence of collecting same for safe keeping which you knew to be false and thereby committed an offence contrary to and punishable under Section 1(1)(b) and 1(3) of the Advance Fee Fraud and Other Fraud Related Offences Act, 2006.’’

The defendant pleaded ‘not guilty’ to the charge.

Prosecution counsel, Fatsuma Muhammed, asked the court to remand the defendant in prison custody and fix a date for trial to commence.

Justice Kumaliya adjourned the matter till September 14, 2021 for commencement of trial and ordered the defendant remanded in the correctional facility.