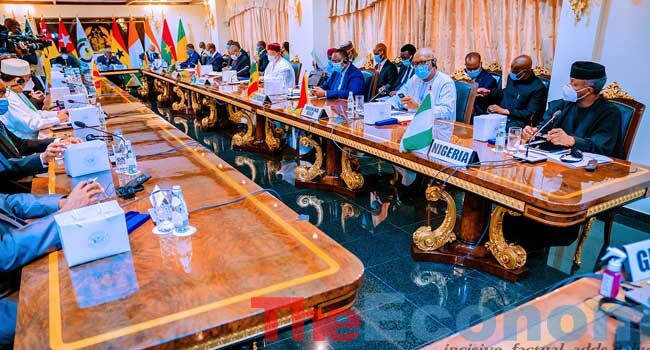 The Vice-President, Yemi Osinbajo departed for Ghana yesterday to represent President Muhammad Buhari at the Extraordinary Summit of the Economic Community of West African States(ECOWAS). Among other things, the political crisis in Mali would be discussed at the meeting, as well as the security situation in the subregion.

Accompanied by the Minister of State Foreign Affairs, Amb. Zubairu Dada, Professor Osinbajo would also meet with the Nigerian Community in Ghana, to discuss issues relating to their welfare in the West African country.

Following the mutiny in Mali on August 18, President Ibrahim Keita was seized and a military junta took over the government. Both the ECOWAS, the African Union, the United Nations and the United States, all condemned the coup d’etat. While imposing a wide range of sanctions on Mali, including financial sanctions, to punish the junta, ECOWAS also despatched it’s Peace Envoy, ex-President  Goodluck Jonathan to negotiate a speedy return to civilian rule in that country. Before the military struck, the people of Mali had suffered from a protracted Islamist insurgency, insecurity, and widespread  protests against it’s government.

The military regime led by Assimi Goita is under pressure by ECOWAS leaders to name a civilian interim-leader, before arranging to return the country to civilian government within one year.