Magu: How the hunter became the hunted 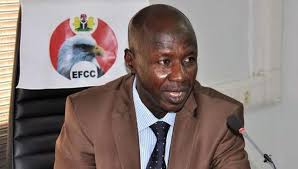 After ten days in police detention, the former Acting Chairman of the Economic and Financial Crimes Commission (EFCC), Ibrahim Magu, has been released. He was arrested on July 6, following his refusal to honour invitations for questioning by the Special Presidential Panel of Inquiry on allegations against him.

At the same time, twelve directors of the Commission, including the Secretary, Olanipekun Olukoyede,  referred to as ‘Magu boys’ (loyalists), have also been suspended and placed on security watch. This order became necessary as some of them allegedly connived to flee with sensitive files and documents requested by the investigating panel in connection with many cases in question.

From the preliminary reports of the Presidential Committee on Audit of Recovered Assets, Magu’s alleged offences were very embarrassing and grossly unbecoming of a leader of an anti-corruption agency. In what promises to be a celebrated but very shameful trial, Magu would be charged for money laundering; corruption; use of proxies to acquire properties abroad; criminal falsification of records and documents at his custody; deliberate use of his position to shield some financial criminals with intent to undermine their trial; insubordination and disrespect to the office of the Minister of Justice; and many more.

Meanwhile, President Muhammad Buhari has approved the appointment of Mohammed Umar as Acting Chairman of EFCC. A serving director of operations in the commission, Umar has been charged to oversee the operation of the anti-corruption agency pending the conclusion of ongoing investigations.

Having secured his release, it is expected that Magu would be prepared by his lawyers to face trial immediately, in order that justice would be seen to take its unbiased course.

It is on record that none of the previous EFCC bosses – Nuhu Ribadu, Farida Waziri, Ibrahim Lamorde – finished well and clean. It may also be true to say that none of them was ultimately convicted and jailed. But standing on the anti-corruption pillar of President Buhari’s administration, it may not be business as usual this time.  Analysts are watching to see whether the case of  Magu,  ‘the hunted who has become the hunted’ will  end like that of  his predecessors, who were  asked to ‘go home and sin no more’.