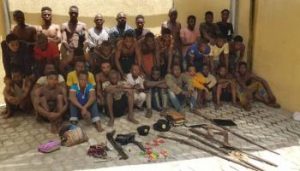 Men of the Lagos State Police Command have arrested 103 suspects during raids on black spots in the Oshodi area of the state.

The state Police Public Relations Officer, Muyiwa Adejobi, in a statement on Wednesday, said the state Commissioner of Police, Hakeem Odumosu, ordered a raid on miscreants capable of attacking unsuspecting members of the public during and after the Eid-El Kabir celebration, adding that hard drugs and weapons were recovered from some of the suspects.

He said, “The Lagos State Police Command on July 19 and 20, 2021, raided some black spots, specifically Oshodi Oke and Oshodi Under Bridge, where 103 hoodlums were arrested with weapons.

“The Commissioner of Police, Lagos State, Hakeem Odumosu, had ordered the tactical commanders and commanders in charge of the Rapid Response Squad and the task force to go after hoodlums and miscreants who might want to create security threats and attack unsuspecting Lagosians during and after the Eid-El Kabir celebration in Lagos State.

“The CP, due to some complaints received and isolated cases of robberies in traffic and harassment at Oshodi, ordered the Commander, RRS, CSP Yinka Egbeyemi, and the Commander, Taskforce, CSP Sola Jejeloye, to consistently raid and police the Oshodi area and other identified areas that are vulnerable to attacks.

In another development, policemen attached to the Sagamu Road Police Division, Ikorodu, on July 19, 2021, arrested a 36-year-old man, John Okibe, at the Aleje area of Ikorodu for allegedly threatening and attempting to rob a Point-of-Sale terminal operator.

Adejobi said the suspect, who was arrested with a toy gun, confessed to the crime.