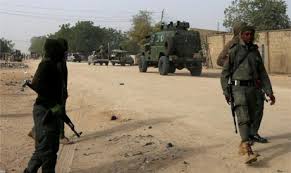 Jihadists in the restive north-east of Nigeria have taken hundreds of people hostage who had only recently returned home from refugee camps, after local government officials claimed their town was safe.

More than 20 trucks of militants stormed into Kukawa town, in Borno state, on Tuesday night. The jihadists captured hundreds of fleeing residents and attacked a nearby military base protecting the town.

1,200 residents had only recently returned to Kukawa in early August, from refugee camps 180km (120 miles) south in the state capital, Maiduguri, a local chief who escaped the attack, told AFP.

The victims had returned, hopeful of restarting their lives and cultivating their farmlands, “only to end up in the hands of the insurgents”, he said.

“We don’t know what they would do to them but I hope they don’t harm them,” said the chief, who spoke on condition of anonymity.

Nigeria’s army and government have not released details of casualties or released details of the attack thought to have been carried out by militants from the Islamic State West Africa Province (ISWAP), an offshoot of Boko Haram, which has waged an insurgency in north-east Nigeria since 2009.

1,200 refugees who had spent almost two years in camps were escorted back to Kukawa on 2 August by military convoys, on the orders of local government authorities.

Over the last two years, government officials have set about returning almost 2 million internally displaced people back to their towns. Yet many refugees – despite enduring squalid, overcrowded camps – have resisted returning. Aid groups have expressed prevalent concerns that much of the region, “freed” by security forces, remains unsafe.

Nigerian authorities have repeatedly claimed to have defeated and degraded jihadist groups, yet they remain at large in the region and peace remains a remote prospect.

The terror of jihadist groups has waned from their height in 2014 as occupying forces in several towns across the Lake Chad region. But in recent years, devastating attacks on the military have surged, and humanitarian workers, security forces and civilians have also been increasingly targeted. More than a million people remain in towns deemed inaccessible by aid groups and cut off from help, in areas where jihadists freely roam.

Nigerian security forces battling the insurgents have reportedly been beset by a lack of weaponry and low morale, while heavily armed jihadist groups have gradually regained a foothold in the region.

The attack on Kukawa, a historic city once a major connection in 19th century trans-Saharan trade, undermines the credibility of government claims, said Bulama Bukarti, an extremism expert and analyst at the Tony Blair Institute.

“This is a major setback to the government’s efforts to resettle internally displaced persons and refugees,” he said. “There have been fears that not enough security has been put in place to ensure the security and safety of returnees and this assault confirms just that.”

He added: “The military keeps insisting that it is succeeding, but attacks like this demonstrate that much is left to be desired.”