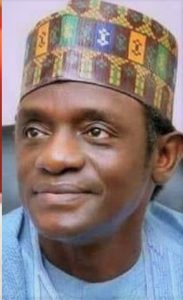 The outgoing Caretaker Committee Chairman of the ruling All Progressive Congress and Governor of Yobe State, Mai Mala Buni, has said that he would leave behind a strong and united APC family to his successor. Buni on his valedictory speech at the APC national convention, gave account of his stewardship as the caretaker chairman of the party in the last two years, noting that his efforts have repositioned the party.

Buni had come under fire in recent times over how he managed the cracks in the party, and was almost removed from office by some powerful forces that were allegedly backed by President Buhari in his last days in office through what many had described as a palace coup.

Buni was appointed to steer the affairs of the party after the removal of Adams Oshiomhole from office in 2019. His mandate however was to manage the crisis in the party and thereafter conduct a national convention that will produce a National Working Committee for the party.

But the convention was postponed several times. However, in his speech last night, Buni attributed it to the larger problems he inherited from a party he said was more polarised then and needed more time to be cured from its internal ailments.

While he thanked the President and stakeholders of the party for the support they gave to him in his days in office, Buni boasted that he was “more confident than ever, that with a population of over 41 million registered members and still counting, APC has the potential and capacity to remain Nigeria’s ruling party and indeed, Africa’s largest political party.”

He said: “I am delighted with your esteemed presence at this epoch-making occasion in the life of our party, the All Progressives Congress (APC), as we assemble here for the National Convention, climaxing the transition process which started with the conduct of ward, local, and state congresses. Today, we are going for the zonal and national offices as well as, the ratification of the amended constitution of Africa’s largest political party, the APC.

*As you are aware, the Caretaker Extraordinary Convention Planning Committee which l am opportune to chair, is a child of circumstance constituted by the National Executive Committee (NEC), to restructure and reposition the party.

“Your Excellencies, distinguished personalities, ladies and gentlemen, permit me to quickly reflect on some of the modest achievements recorded by the party under the Caretaker Extraordinary Convention Planning Committee whose tenure is ending today, for us to appreciate how far we have gone in revamping and improving our beloved party.

“Upon assumption of office, the committee embarked on a genuine and all-inclusive reconciliation process to give everyone a true sense of belonging, confidence, and reassurance in the collective ownership of the party.

“We, first of all, visited some critical stakeholders to engage them in resolving the disputes and other hanging disagreements in the party. While some of these visits were made public, others were done out of the public glare and without media publicity. Similarly, we visited some aggrieved chieftains who sincerely shared their ill feelings with the committee. We spoke to each other frankly, placing party interests above personal interests.

“I am glad to state that those frank discussions built a new hope in the hearts of the aggrieved persons such that, those who earlier left the party returned back, while those contemplating to forsake the party, never left.

“However, when we commenced the assignment, we realized that the problems on the ground had far outweighed our estimation of the time required to resolve the huge problems bedeviling the party. This made the initial Six months dateline grossly inadequate, unrealistic, and not practicable and therefore, the need for extension of more time. Happily, for every extension, we brought in additional values with positive developments into the party.

“Having reconciled substantial stakeholders, members and groups, the committee commenced membership registration and revalidation exercise, being one of the mandates of the CECPC, to establish the party’s numerical strength for proper planning and mobilization. The exercise provided our new members the opportunity to register as legitimate members of APC with equal rights, privileges, and opportunities, as well as, to give back the ownership of the party to the members, using the bottom-top approach.

“I am glad to state with all sense of fulfillment that the membership registration and revalidation exercise, recorded over 41 million members who registered with the details of their Permanent Voter Cards (PVC) and passport size photographs. This unprecedented increase in membership from the previous 11 million registered members to over 41 million registered members, provides the party with an added advantage of winning elections in Nigeria with landslide victories”, he said.

“The Caretaker Committee, made history with an unparalleled record of high-powered defections into the party. Three serving governors of Ebonyi State, His Excellency Engr. Dave Umahi, Cross River State, His Excellency Dr. Ben Ayade, and Zamfara State, Alhaji Bello Mutawalle, defected along with Millions of their supporters from PDP into the APC.

“I am glad to add that the fortunes of the party were further enriched with the defection of former Speakers of the House of Representatives, former PDP national chairman, member PDP Board of Trustees, several Distinguished Senators and Honourable members of the House of Representatives and state assemblies, and several other heavyweights cutting across all the geo-political zones of the country.”

NAN observed that prior to the commencement of the convention on Saturday, former Gov. George Akume, had earlier on Saturday revealed that six of the APC Chairmanship aspirants had withdrawn from the race.

Akume, presently the Minister of Special Duties, was a  frontrunner in the chairmanship race before the reported endorsement of Sen. Abdullahi Adamu by President Buhari.

Akume made the revelation in a letter addressed to the APC Election Sub-Committee, National Secretariat, Abuja.

Adamu was therefore declared winner at the convention after a voice vote in which the ‘ayes’ had it.

NAN reports that the convention was attended by President Muhammadu Buhari and Vice-President Yemi Osinbajo.

,Others are: President of the Senate, Ahmed Lawan, Speaker of the House of Representatives, Femi Gbajabiamila, APC governors, former Governor of Lagos State, Bola Tinubu and other party members as well as delegates. (NAN)