Ahead of this year’s Spring Meetings of the International Monetary Fund (IMF) and the World Bank Group (WBG), President of the WBG, David Malpass, yesterday said he was “deeply concerned” about the impacts of overlapping economic crises on developing countries. 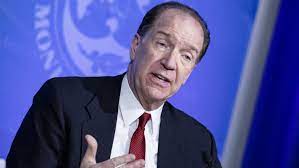 Malpass stated this during a pre-event media briefing, saying he looked forward to discussing solutions with key stakeholders during the Spring Meetings, which began yesterday.

The World Bank chief listed the likelihood of interest hikes and rising prices of essentials such as energy, food and fertilizer as a major challenge facing the global community with hard impacts on the developing countries.

His concern came less than a week after a joint statement by the IMF, WBG, World Trade Organisation (WTO) and the United Nations World Food Programme (WFP) warned of an impending food crisis and called for coordinated assistance for developing vulnerable countries.

“We’ve lowered our 2022 growth rate to 3.2 per cent from 4.1 per cent before. People are facing reversals in development for education, health and gender equality. They’re facing reduced commercial activity and trade. Also, the debt crises and currency depreciations have a burden that falls heavily on the poor.”

He observed that his recent visit to Senegal and Morocco exposed him to the challenge of energy and fertilizer price hike in the two countries like elsewhere in the developing world, stressing that “this is an intense problem”.

“Food crises are bad for everyone, but they’re devastating for the poorest and most vulnerable. There are two reasons. First, the world’s poorest countries tend to be food-importing countries. Second, food accounts for at least half of total expenditures in household budgets in low-income countries, so it hits them hardest,” the WBG President said.

Stressing the content of last week’s press statement, he charged countries to take immediate actions to encourage the production of food, energy and fertilizer. He reiterated the importance of removing barriers to trade and production of food and other essential commodities.

“Global trade is still facing quotas, high import tariffs, high export tariffs, expensive food price subsidies and even export bans on food products. These should stop. The international community needs to immediately step up emergency assistance for food insecurity and help bolster social safety nets. From the World Bank’s standpoint, we are providing roughly $17 billion per year to strengthen food security – a big part of the global effort,” he disclosed.

Malpass spoke on other responses from WBG to tackle the impacts of war and COVID-19 and urged the developed countries to extend a helping hand to the poor who have been hit hardest by the multiple crises.

He pointed out debt and inflation as “two big problems facing global growth” at the moment, saying they have thrown countries into severe financial stress. He added that “60 per cent of low-income countries are already in debt distress or at high risk of it”.

He called for the implementation of the Common Framework, including establishing a timeline for forming creditors’ committees, suspension of debt service payments/penalty interest, expanding eligibility and engaging commercial creditors at the beginning of the process. He envisages that the debt crisis would worsen in the year.

On inflation, he advised: “Policies need to be adjusted to enhance supply, not just increasing demand. Markets are forward-looking, so it’s vital for governments and private sectors to state that supply will increase and that their policies will foster currency stability to bring down inflation and increase growth rates. This is especially important as global supply chains shift away from dependency.

“Central banks need to use more tools under current policies. The inequality gap has widened materially, with wealth and income concentrating in narrow segments of the global population. Interest rate hikes, if that’s the primary tool, will add to the inequality challenge that the world is facing. Central banks can use more of their tools, not just interest rates. Capital is being misallocated now. One of the focal points should be using all the central bank tools so that capital is allocated in a way that helps increase supply. That will be an effective way to address inflation.”