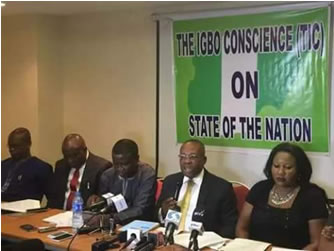 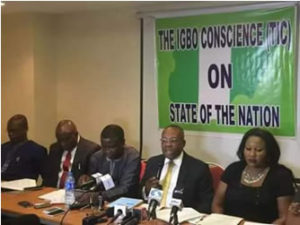 The Igbo Conscience (TIC), a sociopolitical pressure group has appealed to Ndigbo to channel their energy and political alignment towards electing an Igbo person as president of Nigeria in 2023 instead of battling the North for the plum seat in 2019.

In a communiqué issued after its meeting on January 29, 2017 in Lagos, the group described the renewed clamour and debate for an Igbo presidency as a healthy aspect of Nigerian democracy.

The communiqué jointly signed by its Protem Chairman and Secretary, Monday Onyekachi Ubani and Peter Claver Oparah,  read in parts: “We see nothing wrong in the debate especially as it aims to assuage the desires of Igbo to lead a country they have made very great contributions to develop.

TIC observes that there is unanimity of opinion that Igbo deserve the Nigerian presidency, especially as the presidency has gone round the respective zones in Nigeria.

TIC, however, argues that it would be counter-productive for Ndigbo to gun for the Presidency in 2019 because it could jeopardize the existing understanding that guides the country’s power rotation arrangement. According to the group, such move could exacerbate the Igbo political woes or foil the presidential project at the end of the day.

The group argues: “TIC believes that the North still has a running term that runs till 2023 so we do not deem it proper that Igbo should present a presidential candidate in 2019 as the North has up to 2023 to finish its term. We therefore fully align ourselves with the widespread view that Igbo should get the presidency in 2023.

“In furtherance of this, we task Igbo to start organizing themselves into a serious and formidable political bloc, start building critical bridges of understanding with other sections of the country, engage in strategic political alignments that could help achieve this project, stop hate and divisive speeches and actions that might work against an Igbo president in 2023,” it stressed.

The group further warned Igbo leaders to avoid the mistake of thinking that the presidential post has already been ceded to it, stressing that inasmuch as there is an understanding for power to go round, power is not given on a platter of gold. “So we must all direct our focus towards earning the trust, confidence and understanding of other Nigerians enroute 2023 because these are vital steps towards the realization of the Igbo presidency project”.