If You Insist on Probing Us, You Must Probe APC Also — PDP tells EFCC 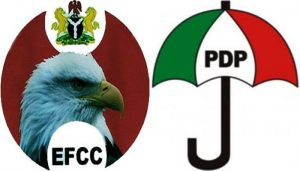 State governors who are members of Nigeria’s largest opposition party, PDP, have frowned at the probe of their party by the anti-graft agency, EFCC. The governors said if the EFCC must probe their party’s finances, it must also probe that of other parties including the ruling party, APC.

The stance of the PDP Governors’ Forum (PDP-GF) on the EFCC probe was announced on Saturday by the Director-General of the forum, C.I.D. Maduabum.

“If EFCC is even-handed and non-partisan, it should also conduct an investigation into other political parties including the ruling party,” Mr Maduabum wrote in his statement. He said the PDP was up to date in the submission of its yearly financial account to the Independent National Electoral Commission (INEC) as required by the Constitution.

He said the PDP governors were not aware that INEC made any complaints to EFCC on PDP’s returns, adding that the recent invitation of PDP officials by the EFCC raised some concerns on the impartiality of the anti-graft agency.

Mr Maduabum said PDP as a political party was accountable to its members and the general public for its actions. ”The PDP governors were concerned that it was a misplaced priority and move to silence political opposition,” the DG said.

He advised the EFCC’s new leadership to learn from the mistakes of its predecessors.

“Even the petition in question did not make a single allegation of misuse of government funds, nor cheating of any individual or public authority by the PDP.

“It is, therefore, surprising that EFCC should use its scarce human and other resources to begin an investigation into PDP finances,” Mr Maduabum said.

The News Agency of Nigeria (NAN) reports that a member of PDP, Kazeem Afegbua, had petitioned the EFCC and the Independent Corrupt Practices and Other Related Offences Commission (ICPC) for a probe of the party’s accounts.

Mr Afegbua in the petition submitted to the EFCC and ICPC in April, asked that the PDP leadership account for the N10 billion allegedly realised from the sale of forms in the 2019 general elections. This made the anti-graft agency invite PDP officials for investigation.

The PDP, however, denied the allegation that it generated N10 billion from the sale of nomination and expression of interest forms in 2019. The party’s National Publicity Secretary, Kola Ologbondiyan, at a news conference in Abuja, said that the PDP generated N4.6 billion, and raised a budget for its expenditure, in line with all known financial regulations.

The PDP governed Nigeria from 1999 to 2015 when it lost the general elections to the APC.
The APC, PDP and many other parties have routinely refused to be transparent with party finances, often violating campaign finance laws.