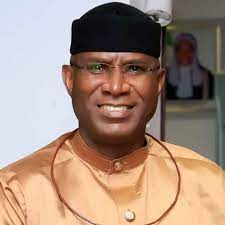 Deputy Senate President and Senator representing Delta Central, Ovie Omo Agege has justified why he voted in support of an amendment to the provisions for electronic transmission of results in the Electoral Act 2016 ( Amendment) Bill, 2021 passed on Thursday.

The amendment to Clause 53(3), proposed by Senator Abdullahi which was passed after physical voting by lawmakers gave a proviso: that the national telecommunication regulatory agency, the Nigeria Communications Commission, (NCC) should determine when electronic transmission be deployed, subject to the approval of the National Assembly.

The amendment which the Senators on the platform of the All Progressives Congress voted No in support reads: The Commission may consider the electronic transmission of results provided the national network coverage is adjudged to be adequate and secured by the National Communications Commission.”

Clause 52 (3) on electronic transmission of results as recommended by the Senate Committee on INEC led by Senator Kabiru Gaya read in part: “The Commission may transmit results of elections by electronic means where and when practicable.”

Following criticisms trailing the amendment by eminent Nigerians who noted that the lawmakers ceded the statutory powers of INEC to the Nigeria Communications Commission, Senator Omo Agege who incidentally is the Chairman of the National Assembly Committee on the Review of the 1999 Constitution has said he voted in support of the amendment in solidarity with sections of the country who are disadvantaged in internet coverage.

The Deputy Senate President, in a statement signed by Prince Efe Duku, his Special Adviser on Legislative & Plenary Matters, confessed that the Senatorial district which he represents enjoys seamless internet coverage.

He however claimed that his position to vote against electronic voting as originally provided by the clause was a vote for uniformity in the application of laws. He further argued that ” if INEC is allowed unfettered E-Transmission power, then there will be unequal treatment of election results and that would be a fundamental lawmaking flaw.”

In simple terms, the Obarisi of Urhoboland voted to support an amendment that ensures, for example, that INEC does not transmit only election results in Urhobo electronically while other areas may have their results transmitted otherwise and safely. For him, all election results must be treated equally under a uniformly applied standard.

Indeed, Senator Omo-Agege as an erudite lawyer knows that it is unconstitutional for the National Assembly to enact an Electoral Act that is inherently discriminatory in its design and intended application. For him, to pass the test of constitutional validity, the law must apply uniformly to all electoral domains in the country, otherwise, such a law could be easily struck down by a court if taken for judicial reviews by those who may be negatively impacted.

“Further, in arriving at his thoughtful decision, Senator Omo-Agege was guided by unimpeached data from the Nigerian Communication Commission (NCC) that E-Transmission of results is only possible in less than 50% of all electoral domains in the country. For him, the message from this data is that if INEC is allowed unfettered E-Transmission power, then there will be unequal treatment of election results and that would be a fundamental lawmaking flaw. So he stood firm to prevent such a move that would have led to a needless waste of legislative resources and time.

“In view of the foregoing, we hereby confidently assure our people that all is well as far as the ongoing Electoral Reform is concerned. Senator Omo-Agege as a leading champion of the reform since he first stepped into the Red Chamber in the 8th Senate is protecting the best, strategic interest of our people and the nation.