I Am Not Aware of Buhari Endorsing Any Candidate Says Fayemi

Governor Kayode Fayemi of Ekiti State, who is also the Chairman of the Nigerian Governors’ Forum, said he was not aware of Buhari’s endorsement of any candidate. Fayemi, while speaking at an event organised by the Centre for Democracy and Development, on Thursday, said Buhari had the right to anoint a candidate, but added that there was no guarantee that his candidate would win. 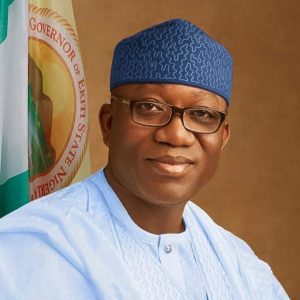 Responding to a question, he said, “As to your question on whether the President has anointed anyone, I have no knowledge of that, but the President is well within his rights to have a preferred candidate. But in our party, let him come and campaign for that candidate at the Eagle’s Square on Saturday.

However, a source in the Presidency said Buhari had adopted the micro-zoning formula presented by the governors and it would therefore be wrong to say the President was imposing people on the party.

The source said allegations that the President was imposing aspirants was nothing but blackmail.

He stated, “The issue of Mr President trying to impose persons against the wishes of party leaders, especially governors, does not arise. It is pure blackmail by those who have lost out.

“The man has been transparent enough to tell stakeholders his desire for the party to have its chairman and the governors themselves wanted to know if he had a preferred choice, which he told them at the meeting on Wednesday.”

The Presidency official further stated that Buhari also had his preferred aspirants for the national secretary and national deputy chairman of the APC, but decided to respect the micro-zoning the governors had endorsed.

The rebuttal comes amid claims by Governor Rotimi Akeredolu of Ondo State that some forces outside the South-West were trying to impose aspirants on the party.

The Presidency official stated, “Even where he preferred certain persons, he could not force them on the people if the positions they are seeking are not zoned to their states.

“For instance, he wanted his long time ally and friend, Ahmed Farouk, as the deputy national chairman (North). But Farouk could not make it because he is from the North-West, while the position was zoned to North-East. That is why you can see Muhammed Kyari as the new person.

“In the same vein, he would have loved Ife Oyedele as national secretary, but the slot does not belong to Ondo; it goes to the Oyo/Osun axis according to the briefing he got from the governors. So, do you now expect the President to force people on others? It is not possible.”