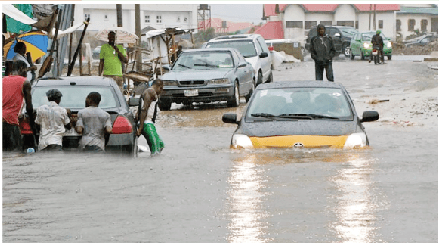 The Nigeria Hydrological Service Agency (NHSA) has advised Nigerians to brace up for higher magnitude of flood, saying what the country has been experiencing in the last few weeks is mere urban flooding, river flooding is about to commence.

NHSA said that the River Niger flood level in Niamey, Niger Republic had attained an unprecedented level of 7.02 metres which poses a serious threat to a country like Nigeria which is at the lower portion of Niger Basin.

The Director-General of the agency, Clement Nze, said  at a press briefing, that it would take about 14 days for the magnitude of flood water sighted in Niamey to arrive Nigeria through the states contiguous to River Niger. “So, it is expected most vulnerable states, including Kebbi, Niger, Kwara, Kogi, Anambra, Edo, Delta, Rivers and Bayelsa, are at alert for the impending disaster,” he said.

Meanwhile, Kebbi, Niger and Kwara states are still grappling with the devastating impact of the river flooding after water at the River Niger reached 6.60 metres. With the increase to 7.02 metres, the affected states may be in for more devastation.  “The flood that happened earlier was caused by 6.66 metres height of flood in Niamey, the one sighted today is still on its way, which means there will be more devastation than we witnessed about two weeks ago in Kebbi, Kwara, Niger and Kogi states,” Nze said.

He noted that the purpose of the briefing is to make the states and communities to be aware that the third leg of flooding in Nigeria (river flooding) has long commenced and it is outside Nigeria’s control.

Nze said that the Jebba and Kanji dams built for flood control had continued to spill water downstream to be able to accommodate water coming from the upper basin. “That is why the communities and states adjoining River Niger will continue to be inundated by river flooding.”

He expressed concern that with water running down farms lands, the country might be faced with food scarcity. He, however, assured Nigerians that the flood this year might not be as devastating as that of 2012.