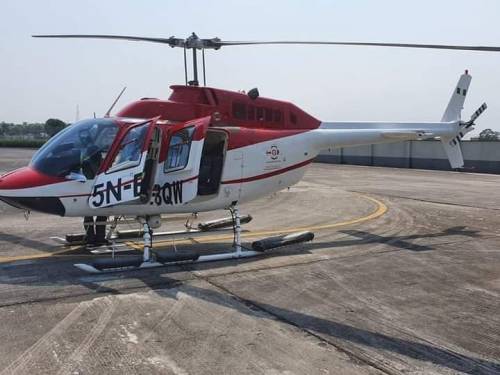 There are indications that the ill-fated Bell 206-B3 helicopter with registration number 5N-BQW which crashed into a building on Friday, on Salvation Road, Opebi, Lagos State, does not have the authority to operate as it was not airworthy. According to sources at the Nigerian Civil Aviation Authority (NCAA), the Helicopter was declared non-airworthy in 2017 by the NCAA but the operators allegedly went through the backdoor to continue operation with the aircraft. Same sources claimed the crashed aircraft has changed hands among three different airline operators in the country, a situation that affected proper tracking of its status as the NCAA was tricked into issuing the Helicopter an Air Operator’s Certificate (AOC).

According to an aviation expert, an AOC authorizes an operator to carry out specific commercial air transport operations and it is issued when the NCAA is satisfied that the operator has the requisite personnel, assets, and systems to ensure the safety of its employees and general public. The expert added that an operator applying for AOC is required to have an air transport licence from the NCAA, which permits it to operate scheduled passenger or cargo air services in the country.

The crashed aircraft is said to have been used at different times by Omni-Blue Aviation Services and Quorum Aviation to obtain AOCs from the NCAA.  A source alleged that Omni-Blue Aviation Services had borrowed the crashed Helicopter to obtain licence from NCAA IN 2016, and a year later, Quorum Aviation approached the NCAA for AOC licence for the same Helicopter. It was at this point that NCAA engineers discovered that the Helicopter was faulty, accusing the management of Quorum of poor maintenance of the aircraft’s engine.

However, despite  that timely discovery, the Helicopter was surprisingly allowed to continue operation, a development aviation experts say is intriguing. There is the need, according to aviation analysts, for the NCAA to carry out an in-depth investigation into how the operators were able to beat the agency, and to act quickly before the mess surrounding the helicopter’s operations tarnishes the image of the NCAA before the International Civil Aviation Organisation (ICAO).

The helicopter crashed with three persons onboard.  The two crew members died on the spot while the third person who was earlier rescued and taken to the Lagos State University Teaching Hospital, Ikeja, later died.  It destroyed the building it crashed into and also vehicles parked in the area.