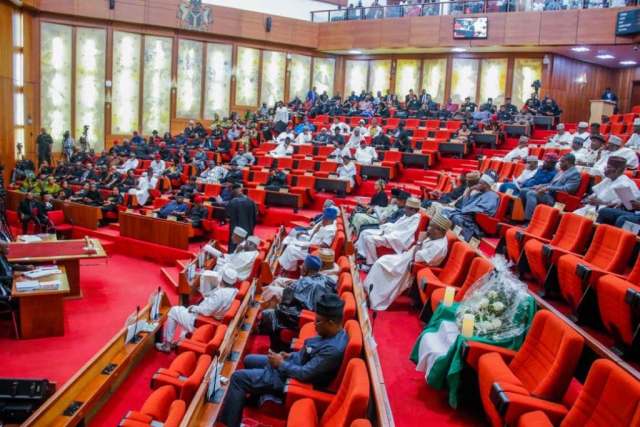 The Petroleum Industry Bill 2020 passed first reading on the floor of the Senate during plenary on Wednesday. The Leader of the Senate, Yahaya Abdullahi, presented the proposed legislation and the President of the Senate, Ahmad Lawan, read the bill for the first time.

The PUNCH reports that the leadership of the National Assembly had, on Monday, pledged to accelerate legislative action on the Petroleum Industry Bill submitted by the President, Major General Muhammadu Buhari (retd.), two weeks ago.

The federal parliament, however, vowed to ensure thoroughness in its consideration, which according to the principal officers, would be treated simultaneously with the 2021 national budget.

The President of the Senate, Ahmad Lawan, and the Speaker of the House of Representatives, Femi Gbajabiamila, stated this during a National Assembly joint leadership meeting on the PIB, with the Minister of State for Petroleum, Timpre Sylva.

The meeting also had in attendance the Group Managing Director of the Nigerian National Petroleum Corporation, Mele Kyari, and other heads of the NNPC subsidiaries. Lawan confirmed that the document was transmitted to the two chambers of the National Assembly two weeks ago and that details of its contents would be read at plenary today (Tuesday).

He said both chambers would forward the documents to their respective committees for further legislative actions as soon as Buhari’s covering letter, which accompanied the bill, was read to the lawmakers.