Half of Benue Land Occupied by Herders — SON ex-DG Laments 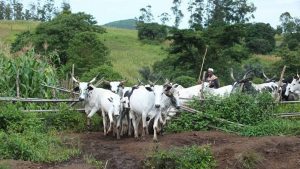 Former Director-General, Standards Organisation of Nigeria (SON), Dr. Paul Angya, has said that 50 per cent of the state’s land is occupied by armed herdsmen.

While interfacing with newsmen yesterday, in Makurdi, Angya noted that attacks by herdsmen and occupation of farming lands were already affecting the state’s status as the ‘Food Basket of the Nation’ and, of course, the country’s food security.

“At the moment, Benue is besieged from all sides by armed herdsmen, vagabonds and bandits. Our rural populace can no longer go to their farms; they are maimed, killed, women raped and crops ransacked and thrown out as feeds to cattle,” he lamented.

The 2023 governorship hopeful in the state and Fellow of the Nigeria Institute of Security, said he wanted to use his expertise and security training to tackle the security challenge in the state.

Calling God to help end the killings in the state, he lauded Governor Samuel Ortom for enacting the Prohibition on Open Grazing and Ranches Establishment Law.

His words: “Governor Samuel Ortom needs to be commended for his efforts at securing the lives and property of Benue people. I applaud him for enacting the Anti-Open Grazing Law because without it, the level of insecurity in the state would have been worse.

“I have been trained by the Federal Government on security at the Nigerian Institute of Security. Benue needs someone with security training and experience to take over from Ortom in 2023 to sustain the security measures his administration has put in place in the state.”

He decried the poor state of federal and state roads in the state, pointing out that the Federal Roads Management Agency (FERMA) was 10 years behind in roads rehabilitation.

In another development, elderly women in Benue State under the
aegis of Concerned Mothers, yesterday, urged President Muhammadu Buhari to urgently and publicly address the nation and stop Fulani herdsmen from killing Nigerians.

The women led by former Commissioner for Agriculture, Mrs. Rebecca Apedzan, also demanded that Buhari should call his appointees to order over assault on the sensibilities of citizens.

Addressing a press conference at the Doo Palace in Makurdi, the group lamented the worsening security situation in the country, especially by marauding Fulani herdsmen who kill, maim and rape thousands of people in Benue and other states.

According to the women, it was insensitive, condemnable and akin to fanning embers of crisis for the Minister of Justice, Abubakar Malami, to compare open grazing with spare parts business.

“The other aide of the President called Garba Shehu denigrates anyone who holds an opinion contrary to that of the Presidency. This is a gross negation of the tenets of democracy. In democracies where government is of the people and for the people, leaders listen to constructive criticism to improve.”