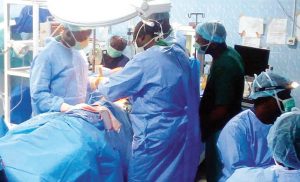 The Divisional Police Officer of Igarra Police Station in the Akoko-Edo Local Government Area of Edo State, Suleiman Muhammed, has been reportedly shot by suspected kidnappers on the Auchi-Igarra-Ibillo Road.

The incident, which happened on Tuesday around 7pm, led to commuters becoming stranded until a local vigilance group rescued the officer, who was left for dead.

A member of the vigilance group said the DPO was shot in the eye, arm and stomach. He added that his team recovered bullets and other cartridges from the scene of the attack.

The source said, “The DPO called us in the morning to go to a place where some suspected Yahoo boys had constituted a nuisance. Later, around 3pm, he told us that some suspected kidnappers were blocking a road, so we went there and chased them away.

“I was told that after inspecting the change of guard in the evening, the DPO left for Auchi where his family resides. The people laid an ambush for him after the MTN mast near Sasaro, and shot him several times. I believe they thought he was dead, so they abandoned him.

“Their gunshots made motorists going to and coming from Auchi to stop until we arrived at the scene in company of the police and rushed the DPO to the hospital. He was bleeding profusely because he was shot in the eye, arm and stomach. After stabilising him, he was rushed to the Irrua Specialist Teaching Hospital.

“On Wednesday morning, my boys and I went back to the scene and we recovered used bullets and cartridges.”

Another member of the team confirmed the incident and lamented the rising presence of kidnappers in the area.

The Edo State Police Public Relations Officer, Kontongs Bello, was said to be on an official assignment outside the state. However, sources at the command said the police were awaiting official details of the incident.