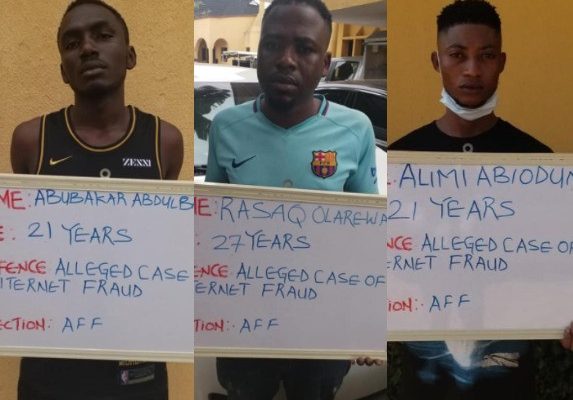 A Kwara State Polytechnic student, Temitope Oyadiji, and one Idris Asimiyu, have been jailed by Justice Sikiru Oyinloye of the Kwara State High Court over offences bordering on Internet fraud.
The duo, who were arraigned for impersonation and Internet fraud by the Economic and Financial Crimes Commission, were sentenced to various jail terms after pleading guilty to the charges. 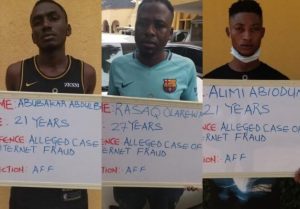 A spokesman for the EFCC, Wilson Uwujaren, said the agency’s prosecutor, Andrew Akoja, tendered before the court the fraudulent messages printed from the convicts’ email addresses, iPhones and laptops.
The judge found the duo guilty of the charges.
He said, “From the totality of the evidence placed before the court, the plea of guilt entered by the defendants, as well as the extra-judicial statements where they confessed to the crime, the court believes that the prosecution has proved its case beyond a reasonable doubt.”
Justice Oyinloye sentenced Oyadiji to one year imprisonment with a fine option of N200,000 and ordered that the iPhone, laptop and bank draft of N309,000 which he raised as restitution be forfeited to the Federal Government.
He also sentenced Asimiyu to one year imprisonment on count one with a fine option of N100,000 and one year imprisonment on count two with a fine option of N200,000.
Meanwhile, the Abuja Zonal Command of the EFCC, on Thursday, secured the conviction of 10 Internet fraudsters.
The convicts, Ulukpo Obokparo, Osondu Stanley, Habib Iko-Ojo, Precious Ani, Emmanuel Ikpan, Umar Mohammed, Israel Kue, Kingsley Mathew, Ibrahim Oyolade and Taiwo Samuel, were prosecuted before Justice Hamza Mu’azu of the Federal Capital Territory High Court, Abuja, for cheating, misrepresentation, romance scam, obtaining by false pretences and defrauding foreigners via the Internet.
The EFCC spokesman, Uwujaren, in a statement, said they all pleaded guilty to their respective charges and were sentenced to various prison terms, ranging from three to six months, with an option of fine of N20,000 to N100,000.
One of the charges read, “That you, Ulukpo Victor Obokparo, on or about the 25th day of June, 2021, within the jurisdiction of the High Court of the Federal Capital Territory, Abuja, while representing yourself as one Williams Brandon, an engineer from New Jersey, USA, through the means of an email address, williambrandon309@gmail.com, carried out an illegal act, to wit: inducing the duo of Helen Isean and Ida Connor of USA to deliver to you the sum of $5,000, thereby committing the offence of cheating,  contrary to the provisions of Section 320 (b) of the Penal Code Act, Laws of the Federation of Nigeria (Abuja), 1990 and punishable under Section 322 of the same Act.”
In a related development, the Port Harcourt Zonal Command of the EFCC on Tuesday raided three hideouts of suspected Internet fraudsters in Abia State.
No fewer than 15 suspects were reportedly apprehended on Aba-Owerri Road, Cherubim Owo Osisioma and Intercontinental, Umuode Osisioma, in Aba, Abia State.
The EFCC spokesman, Uwujaren, said the suspects were rounded up in a sting operation that took them by surprise.
He disclosed that three vehicles; Lexus RX 350 SUV, GLK Benz SUV and Lexus ES 33O SUV; 43 phones of different brands and models, seven walkie-talkies, two digital cameras, eight laptops and three iPhone wristwatches were recovered from the suspects.
Uwujaren added that the matter would be charged to court at the conclusion of investigation.