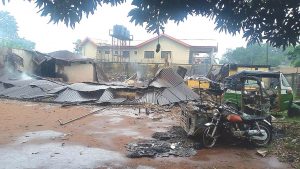 There was confusion in Umuahia, the Abia State capital, on Saturday, as gunmen attacked the state Criminal Investigation Department. The facility was allegedly set on fire.

A source said residents of Umuahia scampered for safety as the gunmen unleashed terror on the police facility.

When contacted, the Police Public Relations Officer in the state, Mr Geoffrey Ogbonna, confirmed the incident.

He said, “State CID Umuahia came under attack about an hour ago. Details not handy at the moment.”