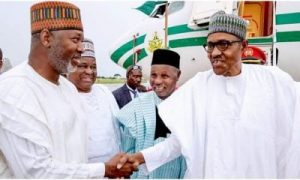 Former Navy Commodore, Kunle Olawunmi on Wednesday hinted that the Nigerian government knows those behind the decade-long Boko Haram insurgency in the country.He made the comment during an interview on Channels Television’s Sunrise Daily.

“They [government] know. Of course, it is in the news. In April this year, the government said they had arrested 400 Bureau De Change (BDCs)-related people that were sponsoring Boko Haram,” Commodore Olawunmi said.

The presidency had earlier said it would publish names of those behind the Boko Haram war with the development generating heated controversy across the country.

But months down the line, the long-awaited list is yet to be made public, a situation the ex-military officer says does not bode well for the government who he accused of shielding criminals.

“Try them, we know them. Why can’t this government, if not that they are partisan, bring those people out for trial?” he asked, corroborating calls from several quarters for the Federal Government to make good its promise.

He claimed that the government has developed cold feet in fighting the insurgency because some of those backing Boko Haram are now top-ranking government officials.

“I can’t come on air and start mentioning names of people that are presently in government that the boys we arrested mentioned,” he said, referencing his time as a member of the military intelligence team in 2017.