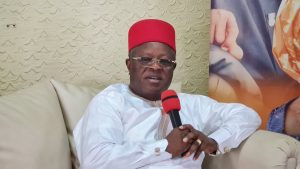 Governor Dave Umahi of Ebonyi State, on Thursday, said that those kicking against the ban on open grazing as contemplated by southern states want killings to continue.

Asked to respond to the claim by the Attorney General of the Federation (AGF), Abubakar Malami, that banning opening grazing in the south is like banning the sale of spare parts in the north, he said those who hold that view misunderstand the situation.

The governor pointed out that the south has no grazing routes, noting that allowing cows to move freely would mean trespassing on people’s property.

He said that gave rise to crises and killings, giving rise to the setting up of the Eastern Security Network (ESN).

While emphasizing that he does not subscribe to free movement of cattle, Umahi called for funding on cattle ranches through the Federation Account. He pointed out that while many northern states are ready for ranching, the idea is being sabotaged.