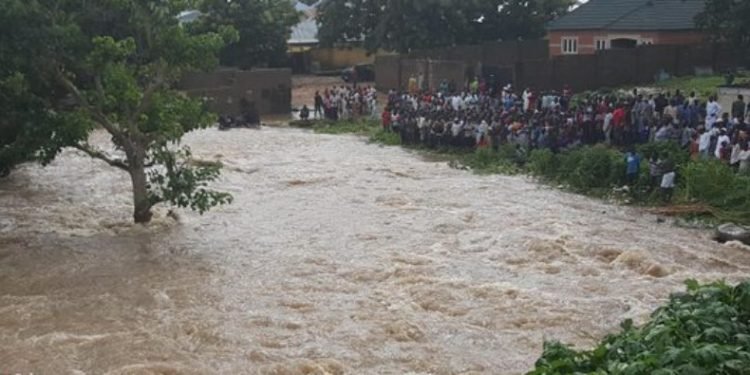 Residents of Ganaja area of Lokoja, Kogi State and motorists from other parts of the state and the eastern parts of the country may have to contend with being cut off any time soon by ravaging flood.

Several houses around the Ganaja village have been submerged with water rising to the roof level of the ground floor of some multi-storey buildings.

The development, which was worsened by an overnight rain, became more noticeable from Tuesday, following the creeping overflow of the banks the River Niger.

Torrential rains accompanied by thunder and lightning were recorded from about 11.45pm on Wednesday and lasted well over two hours, felling a number of house fences around the Phase 1 area.

As at Thursday morning, portions of the Ganaja road had become impassable, owing to the steady rise in water level.

Vehicle owners, particularly those with business or office located after the Ganaja village roundabout and beyond resorted to trekking through the backwaters of the 500 Housing Units, to get to the destinations.

Other establishments along the axis include the Federal Radio Corporation of Nigeria (Prime FM), the Salem University in Jimgbe and the privately owned Prime Polytechnic, further down in Gidan Bassa.

Commercial tricyclists had a field day, charging as high as N200 for a ride that used to cost N50.

Several others expressed the fear that the worst may be yet to come, at the rate the water level keeps rising.

Motorists from the Kogi East and parts of Ajaokuta may have to contend with the unavailability of alternative route or diversion, coming into the capital.

During the 2012 flooding that ravaged the state, the then Kogi State governor; Capt. Idris Wada graded a bypass through the 500 Housing Units, to address the situation.

The bypass, it would, appear went into disuse shortly after.

Before the 2020 flood, the people living around the Ganaja village and motorists had to contend with making do with a single lane of the major road, owing to its dilapidated condition.

Elsewhere, in Koto-Karfe, Kogi LGA, an agriculture hub, several rice paddies and other farms have been submerged by flood, and threatening to overrun federal highway that connects the state to the Federal Capital territory (FCT), Abuja.