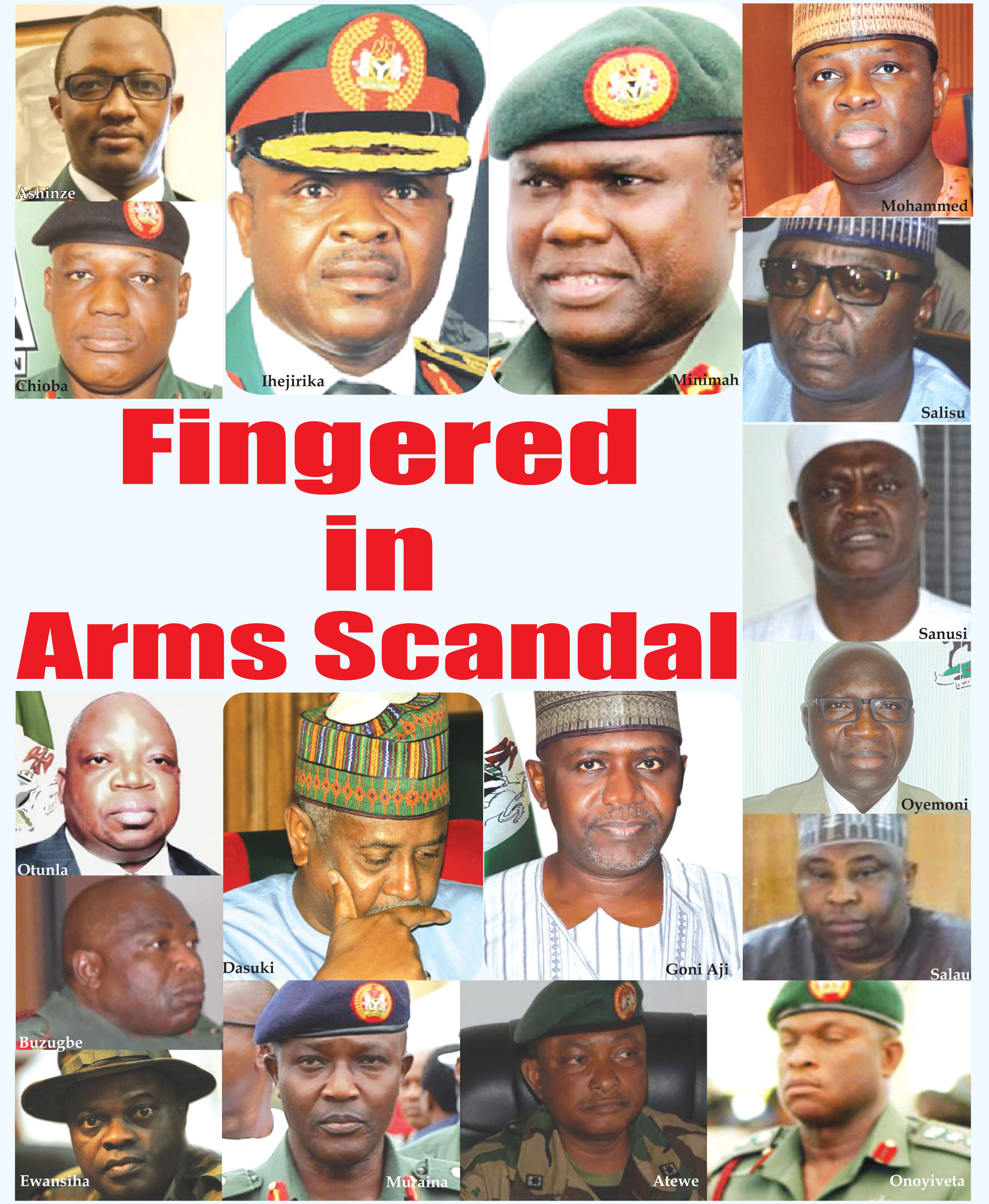 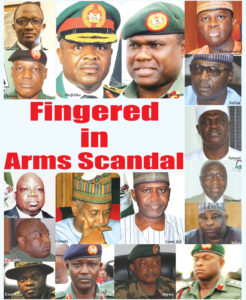 Some top military brass (serving and retired) are not walking with the arrogant swagger they once had as the untouchables in Nigeria’s socio-political space. Their world of impunity is about to crash around them with the recent release of the Third Interim Report on Arms Procurement by Nigeria’s military. The report details findings in the probe into the appropriation of past military budgets as part of the ongoing anti-corruption war.

Tongues in the wider populace are wagging over imminent charges of monumental corruption and brazen thievery to be filed against indicted officers. Never in the nation’s history has any leader summoned the courage to go after the military as President Muhammadu Buhari is doing. Past leaders, analysts say, have been cowed by the power of the military and steered clear of the dreaded ex-generals whom many fear could instigate serving officers into a coup d’etat. Focused and determined as ever, President Buhari, a retired general maintained his steely posture and position and vowed to “kill corruption, even if he had to move against his own constituency.”

Once revered on the continent for its enviable record in international peace-keeping operations, the Nigerian military is now an embarrassment. Retired and serving military brass and their civilian collaborators, according to the Committee on Audit of Defence Equipment Procurement (CADEP) headed by AVM Jon Ode (rtd) and set up by the Presidency to audit military expenditure between 2007 and 2015, allegedly milked the treasury through fraudulent award of contracts and wilful procurement of substandard arms and ammunition in the midst of an ongoing war against the Boko Haram insurgency.

In all, about N380billion was squandered or pilfered by those entrusted with the defence of the country, effectively compromising the professionalism and safety of gallant soldiers deployed to battle fields in the country’s besieged North East. 54 persons — 18 serving and retired military personnel; 12 serving and retired public civilian officials, and 24 Chief Executive Officers of companies involved in the procurement —have been recommended for further investigation. All were either accounting officers or played key roles in the Nigerian Army procurement activities during the period under review.

Many observers are trying to fathom how a military that received the highest budgetary allocation in the past administration running into several trillions of naira still drew funds from other ministries, departments and agencies of government. For example, the committee noted that under the period covered in the interim report, about N71billion and $685 million were re-routed to defence from the Ministries of Finance, Foreign Affairs, Power, the NNPC, and the Central Bank of Nigeria (CBN) among others, messing up public financial accountability. This does not include contributions made by some state governments towards the war against insurgency. Nigeria’s military has been known to operate with impunity but never on the scale revealed in the report.

An army of billionaires…

It has become customary to see generals become billionaires overnight while the military establishment continues to fall into an embarrassing decadence; with decrepit facilities and equipment, and ill-kept rank and file. The pampered class of privileged top brass have over the years fed fat on the resources of the country with impunity.  Many own jaw-dropping properties in highbrow locations in and outside the country as well as fat bank accounts even in hard currencies. Some serving and retired generals have literarily cornered a portion of the economy to themselves, buying up properties and setting up companies using proxies.

Major Gen. E.J Atewe, a former commander of the Niger Delta Joint Task Force and Brigade of Guards allegedly superintended over the misappropriation of N8 billion, an account funded by the Nigerian Maritime Administration and Safety Agency (NIMASA) for Operation PULO Shield, according to the audit committee. Squadron Leader M. Oyadougba, who was the finance officer, allegedly pocketed N32 million which was given to his company for no business transaction.

Major Gen. E.R Chioba, an ex-director general of the Defence Industries Corporation of Nigeria (DICON) allegedly withdrew N81million and $131,000 personally from the naira and dollar accounts of the company for no apparent business transaction. Col. N. Ashinze, a one-time aide to Sambo Dasuki, former National Security Adviser (NSA) and a defence attaché to Germany, stands accused with others for awarding an arms contract worth $125million to a company that was allegedly registered the same day it was awarded the contract. Lt. Gen. Azubuike Ihejirika, former Chief of Army Staff is suspected of using front companies to award contracts to a host of relatives and also of supervising the purchase of arms when he lacked the competence to do so.

Lt. Gen. Kenneth Minimah, a one-time Chief of Army Staff, according to the committee, should be held accountable for the contract awarded to procure weapons patently not needed by the army and attempted double payment to the contractor. Major Gen. D.D. Kitchener, former Chief of Army Logistics is fingered for contract splitting and issuing certificate of completion for a N2 billion contract not executed. The list goes on and on ad nauseum.

Their civilian cohorts are not better, as they are often the ones showing the soldiers the way to loot and cover their tracks. Mr Jonah Otunla, past Accountant General of the Federation is also indicted, although his malfeasance goes back to his days as the permanent secretary in the Ministry of Defence. Otunla and others are liable for alleged fraudulent payment to a contractor that failed to deliver Armoured Personnel Carriers (APCs) to the military for peace-keeping operations. Dr Haruna Usman Sanusi, an erstwhile permanent secretary in the Ministries of Defence and Finance is to be held liable for alleged involvement in numerous fraudulent payments. He should be charged, the committee holds, for alleged non-remittance of N27.5million, being 5% withholding tax to the Federal Inland Revenue Service (FIRS) for a contract to supply spare parts for Artillery guns worth N549million.

Dr Nurudeen Mohammed, a former minister of state for foreign affairs is accused of misappropriating N7 billion which he requested to fund the operations of the Joint Multinational Task Force. The money was released to the office of the NSA. However, neither the NSA nor the defence headquarters could ascertain the utilisation of the fund. Little wonder Boko Haram over-ran the Armed Forces and captured territories in the North East before the advent of President Buhari’s administration.

In what many have described as ‘Shame of the Nigerian Military’, the hammer continues to fall on hitherto untouchable military brasses, who now take rounds to appear before one inquiry or sit in detention facilities across the country. President Buhari expressed his disdain for the corruption rife in the military when he told journalists that he “could not understand how people could just sit down and share $2.1billion (the sum allegedly misappropriated by Colonel Sambo Dasuki) as if they were going to have lunch while people were sitting in IDP camps across the country without the means to cater to them.” Sources say he was miffed by the conduct of the military leadership that could send their soldiers to battle fields without the adequate weapons only to unconscionably court-martial and sentence them to death on grounds of cowardice and desertion.

As the committee continues digging into past finances of the military, sources say there is mounting pressure on politicians by those  under probe to help them get off the hook even as they form an alliance of the ‘unholy’ to thwart efforts of the government to cleanse the military. Already intense lobbying and media campaigns on behalf of some of the indicted officers are clogging the nation’s media. Some are attempting to call the integrity of the probe into question by playing the old, worn-out ethnic card and claims of “witch-hunting.”

So far, it has done no good for those earlier caught in the anti-corruption web. It is not likely to work for this set of accused treasury plunderers either.

By Osaze Omoragbon and Pita Ochai