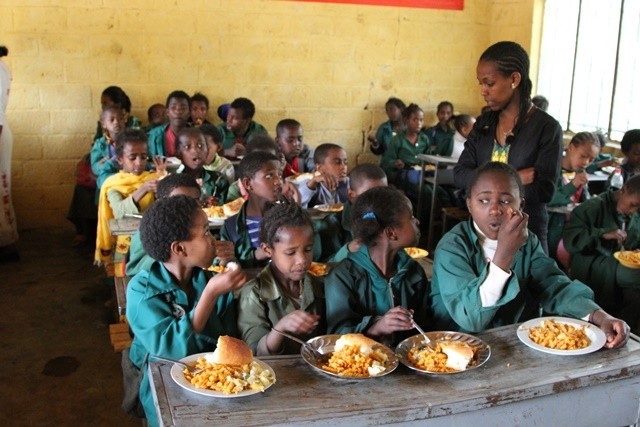 The Education Secretary disclosed this in an interview with the News Agency of Nigeria (NAN) on Thursday in Bakori.

He explained that prior to the introduction of the school feeding programme, only a little over 5, 000 pupils were attending the schools.

According to him, the Federal Government’s initiative is “a welcome development”, stressing that it has encouraged parents to send their wards to public schools.

“Some of the parents told me that for long they had been planning to register their children in primary school but due to some reasons they were not able to do so.

“But with the introduction of the Federal Government’s Primary School Feeding programme, they were encouraged because even without breakfast at home, they will get the food in school”, he said.

He noted that the programme has also boosted the education sector in the area, saying that the key players now  have more confidence to mobilise parents to enroll their children in public schools.

Tsiga added that the programme had also brought about the total control of the children and also contributed in reducing the number of out-of-school children in the local government area.

According to the education secretary, with the programme in place more female children are now enrolled into schools more than in the previous years.

He described the development  as a great success to education sector in the local government area and the state in general.

He explained that the local and state governments with the support of the United Nation Children’s Fund (UNICEF) have ensured a conducive learning environment for the children.

Tsiga added that some of the areas they focused is the provision of potable drinking water and conveniences for the students to always feel at home whenever they are in school.

NAN reports that with the introduction of the programme, children in public primary schools across the country would have at least one very good meal daily.

Also speaking, a parent, Malam Abdullahi Baba commended the Federal Government for the initiative which he said would go a long way in increase pupils enrolment and attendance in schools.

“This programme of the Federal Government has encouraged me to re-enroll three of my children who were out-of-school for some time,” Baba said. (NAN)