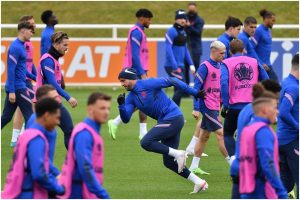 England can avenge decades of hurt at the hands of Germany when they face their old rivals in a blockbuster Euro 2020 last-16 clash on Tuesday after the tournament was rocked by France’s stunning exit.

Gareth Southgate’s side host Germany at Wembley at 1600 GMT in what is England’s biggest match on home turf for 25 years.

England beat the Germans to win the 1966 World Cup final, but their major tournament history has been littered with painful exits against them since then.

A quarter-final loss at the 1970 World Cup ended England’s reign as champions, while the 1990 World Cup semi-final defeat on penalties is still etched in the nation’s psyche.

When England last played at home in a tournament, Southgate was the Euro 96 fall guy as he missed a crucial penalty in the semi-final shoot-out defeat.

There was also a heavy defeat at the 2010 World Cup yet Southgate, aware of the debilitating weight of that history, insists the tie is not a chance to exorcise the ghosts of past England failures.

Instead, he believe it is a chance for his players to add a memorable new chapter to their personal stories.

“This team, I’ve said for a long time, have had so many unique achievements and my focus is on this team and helping them to succeed,” Southgate said.

“This is about our players. This is their moment and it’s their opportunity.”

– ‘Loser goes home’ –
Asked if perhaps his Euro 96 pain would give his players extra motivation to win it for him, Southgate said: “Good grief, no. I don’t think we’ll be relying on that!

England have never won the European Championship and a victory against Germany would be only their second knockout stage win in the history of the competition.

In contrast, Germany have been crowned kings of Europe three times, with the most recent success coming in 1996.

However, Germany travelled to London in the unusual position of fearing defeat against England.

Joachim Loew’s team stumbled into the last 16 after rescuing a 2-2 draw against Hungary in their final group game.

Germany are not the intimidating force of old and, with Loew stepping down at the end of the tournament, a defeat would signal the end of an era.

Despite winning the World Cup in 2014, Loew has been criticised for his role in a humiliating group-stage exit from the 2018 World Cup and a series of poor results before the Euro.

“All in all, I thought about it for two seconds,” said Loew ahead of potentially his last game.

“This is my passion. My whole focus is on the match and I hope we will succeed.”

England will have the vast majority of a 40,000 crowd on their side at Wembley and Loew expects a spine-tingling encounter.

“This is a match which electrifies everybody. For both teams, it’s in or out, it’s now or never, the loser goes home,” he said.

The winner will face a quarter-final in Rome against the winner of Tuesday’s late tie between Sweden and Ukraine, which will be played in Glasgow.