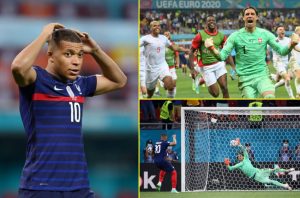 In what seemed to be a twist of fate, world champions France suffered a stunning defeat against Switzerland, losing 5-4 on penalties after a thrilling 3-3 draw in Bucharest as Kylian Mbappe missed the vital kick.

France trailed to Haris Seferovic’s first-half header and could have fallen further behind when Ricardo Rodriguez’s 55th-minute penalty was saved by Hugo Lloris.

Karim Benzema scored twice in 244 seconds immediately after that miss to put France ahead.

Paul Pogba increased their lead with a stunning strike, but Seferovic struck again in the 81st minute and Mario Gavranovic  equalised in stoppage time.

Yann Sommer was Switzerland’s hero in the shootout as the goalkeeper saved Mbappe’s penalty to seal an incredible giant-killing.

“Penalties are always cruel for one team and unfortunately it was us,” said France coach Didier Deschamps.

“We are not used to it, but we will have to accept it.”

In the quarter-finals, Switzerland face Spain, who hit back for an epic 5-3 extra-time win against Croatia after blowing the lead in Copenhagen.

Pablo Sarabia, Cesar Azpilicueta and Ferran Torres netted to put Spain 3-1 ahead with 13 minutes left after Pedri’s own goal had given Croatia the lead.

Mislav Orsic and Mario Pasalic scored in the last five minutes to force extra time, but Spain prevailed thanks to goals from Alvaro Morata and Mikel Oyarzabal.