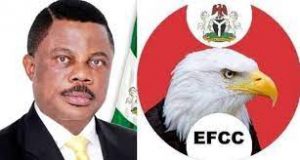 Chief Willie Obiano, the former governor of Anambra State has finally left the custody of the Economic and Financial Crimes Commission, EFCC, almost a week after being clamped inside. A reliable source confirmed that Obiano was released on Wednesday night after meeting the administrative bail conditions earlier granted him.

One of the conditions slammed on the former governor was for him to produce to sureties, who must be directors on grade level 17 in the Federal Civil service.

Another condition slammed on the former Anambra CEO was for him to produce two senior citizens, who must be landlords in Maitama, Asokoro or Wuse district of Abuja.

It was learned that Obiano’s travel documents had also been withheld to stop him from fleeing the country until investigation over his tenure is completed.

He was detained shortly after his handing over the reins of power to Governor Chukwuma Soludo last Thursday.

The agency claims Obiano spent N37 billion as security vote and another N5 billion from SURE-P.

He may be charged to court for money laundering and breach of public trust before being able to leave the country again.