Edo Governorship Election: A State Sitting On A Powder Keg 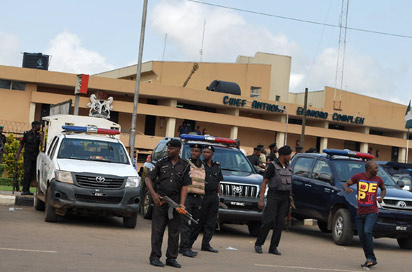 Abraham Lincoln’s saying; “the ballot is stronger than the bullet” is currently witnessing a reversal in Edo State as she gears up to conduct its governorship election in few weeks time. In the midst of the confusion and uncertainty surrounding the forthcoming Edo gubernatorial election, there is a palpable sense of insecurity and social unrest occasioned by the desperate scramble of powermongering politicians.

In the last one month, the state has recorded multiple cases of political violence and youth restiveness resulting in bodily harm and the loss of valuable property. The unfortunate event of 25 July, at the Palace of Oba of Benin in Benin City is still fresh. The day witnessed a deadly confrontation between the loyalists of the governor, Godwin Obaseki and those of his main contender, Pastor Osagie Ize-Iyamu. By the time the dust settled, many people had sustained varying degrees of injuries. While some had machete cuts, bruised arms and legs, others had bullet wounds. Not less than ten people had bullets lodged in their bodies in the course of the violent confrontation. The two feuding groups accused each other of being the cause of the violence while absolving themselves of any blame.

The state continues to witness increased incidents of violent electioneering campaigns as well as open threats to public peace and order. Political altercations which used to be normal activities of political followers in the state are now preludes to public fights and social disorder. Arms are brazenly brandished in some parts of the state and threats of war issued with little regards to law and order.

The resurgence of the state’s House of Assembly’s internal crisis is further heating up the polity. The governor’s earlier refusal to inaugurate 14 of the 24-member state assembly in 2019 has come back to haunt the peace of the state. It would be recalled that Governor Godwin Obaseki had, while inaugurating the Edo State House of Assembly in 2019, omitted 14 members of the legislative body whom he claimed were not physically present. Every effort made since then by notable individuals and the national assembly to have the governor issue a new proclamation has been rebuffed. It was believed that the omitted members were staunch supporters of Comrade Adams Oshiomhole, the state’s former governor. As if to seal the excluded members’ fate permanently, the then Deputy Speaker of the newly inaugurated house, Hon Yekini Idiaye had approached a Federal High Court sitting in Port Harcourt to restrain the national assembly from taking over the state assembly, a prayer he got.

Surprisingly, a year later and with the defection of the state governor from APC to the PDP, the Deputy Speaker and 2 other APC members of the house had refused to defect with the governor to his new party. This obviously irked the governor’s camp which consequently led to the impeachment of the deputy speaker and the suspension of the “recalcitrant” members. With the switch in allegiance, the number of anti-Obaseki’s lawmakers had grown to 17 members out of a house of 24 members. These 17 members have therefore regrouped and formed a parallel legislature in which they “impeached” the substantive speaker, Rt Hon Frank Okiye and replaced him with Hon Victor Edoror at a private residence.

The ensuing drama by the different factions of the state assembly has further heightened the state of insecurity in the Edo with many people urging caution. There have been several attempts by the feuding factions to make use of the assembly complex, acts that have been prevented by the Nigerian Police Force. The police cordoned off the assembly complex in order to prevent a further breakdown of law and order. Curiously, the complex has been subjected to a sudden renovation work, a clear alibi used by the state government to refuse anyone from accessing it for any kind of legislative function. Many political watchers believe that these are delay tactics meant to postpone the evil day. In conclusion, it is in the overall interest of the state, south-south region and Nigeria in general that there is peace in Edo State and the Niger Delta. As part of Nigeria’s Niger Delta region and the gateway to the Middle Belt, a jolt in peace in Edo State would have a spiraling effect on the peace and tranquility of its neighbouring states. It is therefore in the interest of all well-meaning Nigerians that a peaceful poll is conducted in Edo State. Governments at all levels must endeavour to give peace a chance in order to strengthen our democratic institutions and guarantee the sanctity of our electoral system.