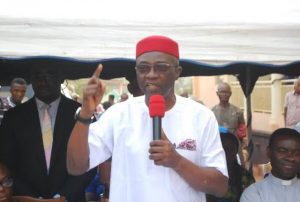 The Deputy Governor of Imo State, Prof Placid Njoku has warned Shared Prosperity Ambassadors of Governor Hope Uzodimma to comport themselves crediblly and responsibly as they go about discharging the duties assigned to them.

The Deputy Governor spoke Tuesday night when the ambassadors and their coordinators drawn from the 27 local government areas of Imo State paid a courtesy call on the Governor at the Government House Owerri.

The ambassadors and their coordinators are to help drive Governor Uzodimma’s Shared Prosperity Agenda throughout the nooks and crannies of Imo State and even beyond.

Prof Njoku who represented Governor Uzodimma at the event charged the menbers “to maintain the standards and qualities of the Governor and avoid debasing the ethos for which Hope Uzodimma is known.”

The Deputy Governor noted: “To be an ambassador is to represent the principal both in name and in character. Therefore, to be ambassadors of Governor Hope Uzodimma you must be always God-fearing, transparent and accountable, respectable and responsible as well as being genuine in all your dealings.”

Prof Njoku insisted that the above qualities are what Distinguished Senator Hope Uzodimma, the Governor of Imo State is noted for.

“Governor is a child of God, who has found enormous grace in God. With God on his side he has been able to surmount and overcome initial challenges he met at the inception of his administration, which made him unique. He came, he saw and he conquered.”

The Deputy Governor told the ambassadors that Governor Uzodimma has been able to put a stop to most of the bad things that were prevalent in Imo State before he assumed office and that he has refused to hand over Imo to bandits and vampires, a situation that has made it possible for the State to return to the path of peace.

He noted that the Governor is always willing to work with them and assured the group that “working together with the Governor, Imo State will be transformed for better.”

On the reason for the visit, the Special Adviser to the Governor on Political Matters, Chief (Dr.) Bathos Nwadike, said the group was galvanized from the grassroots – wards and local governments – to “support the programmes of the 3R mantra of the Shared Prosperity Government and carry the massage beyond the shores of Imo State.”

The coordinators of Okigwe, Orlu and Owerri zones respectively – Chief Regis Uwakwe, Barr. Ikenna Ihezue and Chief C. B. B. William, acknowledged that their mission was to ensure that the message of the Shared Prosperity Agenda is planted at the grassroots of Imo State.

Women leaders of the Group, Mrs. Ben Igwe and Mrs. Izuchi Duru respectively thanked the Governor for “bringing the governed nearer to government,” and pledged the unalloyed support of Imo women to the Shared Prosperity Government.

Highlight of the visit was the passing of vote of confidence on Governor Uzidimma via a motion moved by Barr. Ihezue which was affirmed by all members in attendance as well as the presentation of report on the mobilization tour that took the ambassadors to the 27 LGAs of the State.