Despite all the assurances of security of life and property by the Imo State government and the security agencies, indigenes and residents in the state, yesterday, complied with the sit-at-home directive by the Indigenous Peoples of Biafra (IPOB).

IPOB had, last year, issued a directive that people in the South East should sit at home every Monday and days their incarcerated leader, Nnamdi Kanu, would appear in court, as a mark of solidarity for him. The directive was later amended for only court appearance days. However, unknown group of gunmen hijacked the directive and kept enforcing Mondays as sit-at-home days. 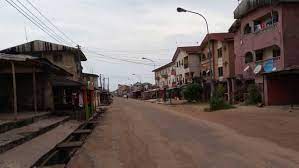 Recently, unknown persons were said to have dropped a letter at a strategic place in Owerri, warning residents to comply with the order or face consequences. The threat prompted another round of compliance in the state.

Both the Imo State Police Command, and the Imo State Government, through the statements signed by the police spokesman, Michael Abattam, and the Commissioner for Information and Strategy, Declan Emelumba, respectively urged Imo residents to go about their businesses, assuring them of safety.

Imo State Government also warned civil servants to report to their duty posts on Mondays and working days, threatening to sanction any absentee without authorisation.

However, the streets of Owerri, yesterday, were deserted. Schools, banks, shops and some markets were closed.

A resident, Geoffrey Okubi, said he is not ready to risk his life and that of members of his family.

He said: “This threat is serious. My family and I are not ready to flout the IPOB’s directive or any unknown person’s directive for that matter. We do not want trouble.”