Covid-19 is a blow on takeoff of Eco currency—Ouattara 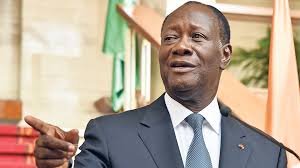 The President of Cote d’Ivoire Alassane Ouattara has expressed doubts on the planned takeoff of the planned West African single currency, The Eco in the next few years blaming the delay on the Covis-19 pandemic.  The new currency which is billed to replace the France backed CFA franc this year has been derailed by the coronavirus pandemic and its launch could now be up to five years away, President Alassane Ouattara said adding that the sub regional body (ECOWAS) will have to work on a contingent approach to ensure the currency comes onboard in the next five years.

It could be recalled that West Africa’s francophone eight-nation monetary union announced it would sever some financial links with Paris and switch to the new currency, called the eco, by the end of 2020 while keeping it pegged to the euro. But these ambitions have been thwarted as countries instead grapple with the economic fallout from the global pandemic. The International Monetary Fund expects Sub-Saharan Africa’s economy to contract 3.2% this year – its worst performance on record.

“We know the eco cannot be put in place this year because of COVID-19,” Ouattara said, adding that talks on the eco were held in Niger on Sept 7., where countries vowed to work on achieving the agreed criteria for the currency’s launch, including national budget deficits at or below 3% of gross domestic product.

“We think it will be difficult to get to a 3% deficit for two or three years, so personally I don’t see the eco’s arrival for three to five years,” he said.

He was speaking in a personal capacity and not on behalf of the currency union, which has not yet commented on a new timeframe for the currency’s launch.

However, the region’s biggest economy, Nigeria and other Anglophone countries called for restraint urging for more consultations. This came as Ghana earlier said it would also want to adopt the eco, but has urged members of the currency union to ditch the planned euro peg.